My brother got married a couple of weeks ago (hi Anthony, how’s married life treating you?), and I got to make the wedding cake.

Or should I say, the wedding cakes? 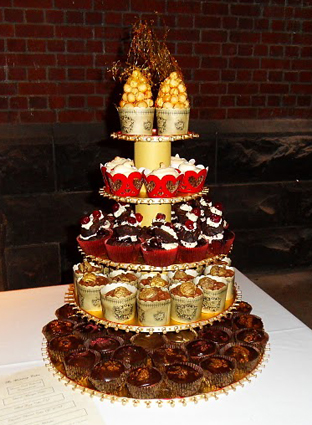 You can’t actually see all the cakes in that picture, because I made about 140 of them, and my cake stand only fits about 90 cakes.  Maybe a few more.  I wasn’t counting… I was too busy keeping them replaced as they got eaten.

The wedding had a sort of unofficial steampunk theme, so I decided to make my cake boards look a bit more steampunk.  Steampunk to me means gears and metallic things, so I grabbed a lot of gold spray paint and several packets of pushpins and got to work…

Steampunk also equals Victoriana, so I found some lovely chocolate brown cupcake cases decorated with a vaguely William Morris-style oakleaf design, and then tried to stencil patterns onto the 64 chocolate mudcakes for the bottom layer.

I discovered quickly that you can’t use edible gold spray paint for stencils.  And that some colours of glitter go really odd colours on a chocolate background. I was quite disappointed with them initially, but they developed a rather shining sort of elegance in the candlelit venue.

One of the bigger challenges for this process was baking to accommodate a variety of food allergies and preferences.  Chocolate mudcake was specifically requested to go with the rather wild cherry beer, but I was also asked to come up with something gluten-free, something nut-free, and something vegan.  Oh, and if I could manage a low-fructose cake that would also be good.

Inspired by the chestnuts at the Farmers’ Market, I decided that a lovely autumnal chestnut and chocolate cake would be a good plan for the gluten-free layer.  Because I am totally insane, I made candied chestnuts to decorate them (I originally aimed for glacé chestnuts, but as a novice in the art of candying fruit, I let the sugar go a bit too far), and then decided to spray paint them gold, too, because edible gold spray paint is the coolest thing in the world… 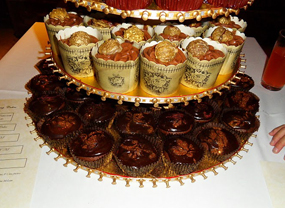 To my delight, it transpired that my Mont-Blanc-inspired cakes were low fructose, too, and also quite delicious.  They were also quite dense, which made things interesting when people started removing them from the cake stand, which promptly started to tip over…

Vegan cupcakes I can do in my sleep (thanks to a very fun cookbook called Vegan Cupcakes Take Over The World, which I will be reviewing one day soon), and I decided that wild crazy cherry beer called for Vegan Black Forest Cakes.

They were a little on the sweet side, but not at all bad.

My lemon meringue cupcakes were completely self-indulgent and absolutely useless for all forms of food allergy.

This didn’t stop all twelve of them disappearing in under a minute.  Also, aren’t the little red wrappers cute?

Of course, there’s no point catering for everyone’s food allergies if they can’t tell which cakes are which… 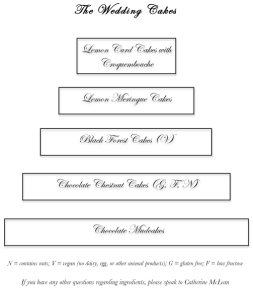 Naturally, I provided a menu…

But what do you put on the two bridal cupcakes at the top of the tree?  I actually had a lot of sensible ideas for this, but then I saw a Women’s Weekly recipe for cupcakes topped with dozens of profiteroles, croquembouche-style.  Absolutely insane, I pointed out to my husband.  He agreed.  But I reckon I could do it, I said to my mother.  She seconded my remark about insanity.  So naturally I had to prove that I could…

Aren’t they beautiful?  And yes, that’s them in my header, too.  You don’t mind seeing them twice, though, do you?  These were actually my second batch – I made a trial batch of tiny profiteroles two days before the wedding, and then made my first croquembouches late on the Friday night, burning most of my fingers in the process. But I wasn’t happy with the way the profiteroles had softened… so I made a new batch on the Saturday morning, and then made an extra croquembouche cake, just in case of transport issues.

Oh, and I made some extra toffee for the top. 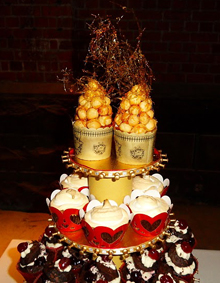 Because you can never have too much fine toffee.  Incidentally, I did not attempt to fill the profiteroles with custard (though I did fill the cakes with lemon curd). This is because I am not completely mad.  Though, to be fair, it’s also because I don’t have a syringe.

And that is the story of the wedding cakes.

The origin of the ghostly figure in the corner of the picture is less certain (but it probably has something to do with my determination to add yet more toffee to the top of the cake while my husband was attempting to take photos for posterity).