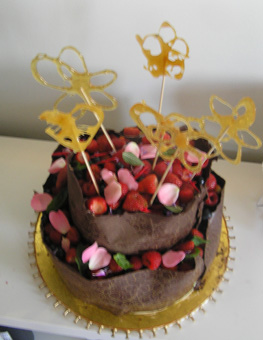 This was very nearly not so much a show-off post as a Post of Shame.  Seriously, while this cake ended up looking and tasting beautiful (though a tad more ‘rustic’ in appearance than I had originally hoped), every single step went horribly wrong at one point, right down to the decorations starting to melt in the car as we trundled down Sydney Road in stop-start traffic.

Honestly, by the time we got to the reception – which was for the wedding of two of my lovely scientists and thus contained about two-thirds of my two Divisions – I was just about ready to cry.  The shame of producing an imperfect wedding cake!

Fortunately, almost anything looks a lot better if you cover it with enough berries and rosepetals, and in the end it really did look very nearly as lovely as I had hoped. And the chocolate, almond and raspberry cake tasted phenomenal, too.  I was less happy with the allergy-friendly (no dairy, no eggs, no nuts) chocolate and berry cake, but the people it was for liked it, and one girl told me she couldn’t taste a difference between the two.

Anyway, I feel that it is salutary to tell the entire story of the wedding cake, from start to finish, for the sake of anyone who was ever intimidated by the idea of making a wedding cake.  Because seriously, if this wedding cake, with everything that went wrong in the making, can turn out well, then yours can too…

The first thing I did yesterday was make the allergy-friendly wedding cakes.  It’s always best to make the allergy-friendly cake first, because that way you can do it and get it all sealed away before you start working with any allergens.  Also, I like to rinse out and re-use bowls if I’m making several cakes in one day, and you can’t do that if the first cake contains things that can’t be et by the eaters of the second cake.

My practice cakes had turned out OK, but not very raspberryish, so I decided to add some raspberry oil to the final mix.  This was mistake number one – my hand slipped, and I accidentally put in too much raspberry oil, which made the whole cake rather sweeter than I would have preferred.  As far as I could tell – the trouble with wedding cakes is that you can’t really go tasting them in advance.

The big cake was a chocolate, almond and raspberry cake, which I can pretty much call my own recipe at this point, since it has come a very long way from its origins in the Women’s Weekly.  I decided to make it in my big 30cm tin, with an estimated cooking time of 3-4 hours (during which time, I might add, I popped into town to run some errands, got off at the wrong station and wandered around in North Melbourne getting increasingly hot and confused, all of which would be much less embarrassing if I hadn’t been living and working in Melbourne for the last 17 years).

I got home after two hours and the cake wasn’t even slightly done, though it was threatening to scorch on the top.  I covered it with foil and put it back in the oven.

Two more hours went by.  Still not done.  And another hour, with very little progress being shown…

At four-thirty, I decided that no cake could possibly need more than 5 1/2 hours in the oven, and pulled it out.   I left it to cool in the tin overnight, in the hope that this would finish the job.  (Then I spent the night worrying about serving raw cake… though to be fair, raw cake was highly unlikely at this stage) 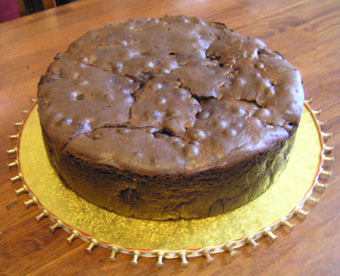 That is a lot of cake. Trust me.

By this point, I really couldn’t face remaking the other cake (something I had considered momentarily in the first flush of horror after going overboard with the raspberry oil), which actually had a very nice texture and which I felt I could redeem with a sufficiently sharp raspberry filling.  So I shut up shop for the day, and went to read up on tempering chocolate. 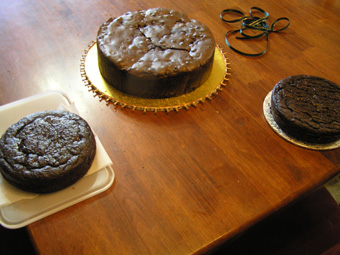 The green ribbon is actually a red herring. It was going to go around a cake board, but I changed my mind.

This morning, then, I got up and made a ganache out of dark chocolate, raspberries and coconut milk, and sandwiched the small cakes together.  I think this was the first and last thing that went according to plan in the entire cake-making business. 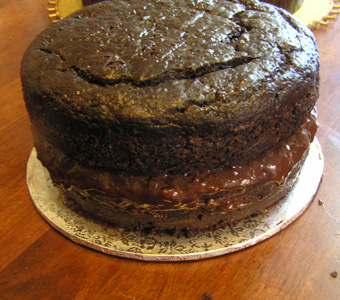 There’s no such thing as too much chocolate and raspberry ganache, but if there was, I’d have used it…

I then made the white chocolate ganache, and went out to buy berries and pick edible flowers while it was cooling.  Which took hours.  And hours.  And HOURS.  I was beginning to develop a very bad attitude about this cake.  Or possibly the cake was developing a bad attitude about me.  Either way, we were definitely not on the same side. 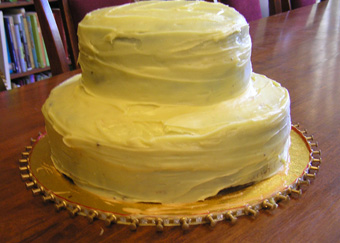 Finally, I was able to get the ganache on the cake and put bottom and top together (for the curious, I actually put ganache on the big cake, put the small cake with its board on top, and then covered that with ganache, so that the two cakes would not touch at any point).  I really should have stopped there, while the cake actually looked fairly classy.  But no, I had to do the chocolate collar and the berries. 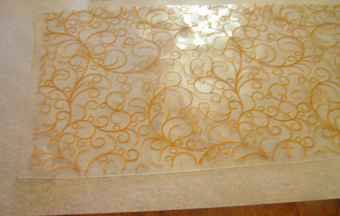 Cocoa butter transfers. This is one of the simplest ways to get a really pretty effect on chocolate. Assuming you are not having a Bad Chocolate Day, in which case even simplicity won’t help you.

I’d found these amazing cocoa-butter transfers on acetate that I wanted to use to make the chocolate super-pretty, but first I had to temper the chocolate.  This would be my fourth attempt at tempering chocolate at home.  So far, I have been successful… once. 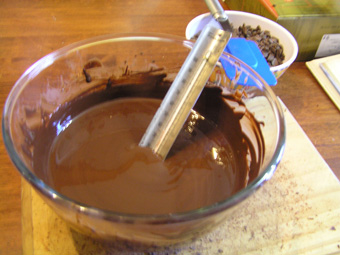 Looks so professional, doesn’t it?  Pity it doesn’t reflect reality…

Alas, that number has not changed.  To be fair, this was not wholly my fault – I discovered the hard way that my thermometer wasn’t reading temperatures under 30°C (when I mentioned this later, no fewer than three people suggested I pinch a thermometer from the lab), which is kind of a problem, and since by this time it was mid-afternoon, I decided I’d better just go with my rapidly-cooling melted and untempered chocolate.  I spread this onto the transfers, and stuck them to the cake.

Half of them immediately tried to fall over.

Fine.  I left the room, in the hope that the whole thing would work better if I wasn’t watching it. 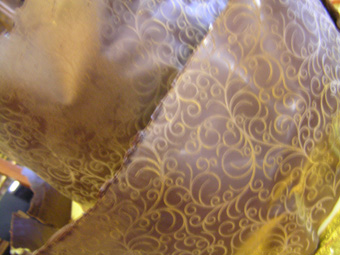 But if you look at it in extreme close-up and kind of blurred, it looks quite good!

Eventualy, the chocolate set enough for me to peel off the acetate.  Some of the pattern remained, but not all of it, and frankly, the whole thing was beginning to look like a dog’s breakfast.  I locked the cake in the study, to see if it would magically look better if I ignored it for half an hour (this trick really does work – I think it’s because one gets enough distance that the flaws don’t stand out quite so  much). 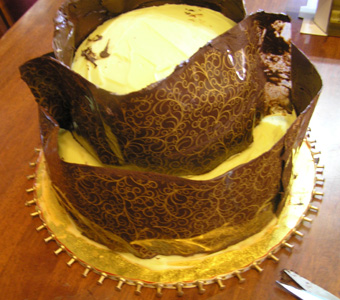 This is really not how you want a wedding cake to look.  The acetate is still on at this point, incidentally.  It will look worse once I remove it…

At this point, I was beginning to feel that even berries wouldn’t redeem this cake, so I decided to make some spun sugar, in the hope of distracting attention from my derelict looking cake collar.

I threw out that batch, and tried making toffee and drawing hearts and flowers on baking paper.

The sugar crystallised.  I’ve been making toffee quite successfully for years now, mind you, and have never had it crystallise on me before, but today was not my day.

I threw out that batch, too, and started making a dry caramel, which I used to burn my fingers.  Actually, burning myself was something of a relief – at least I had gotten the inevitable injury out of the way, and for some reason I never make toffee well unless I burn myself in the process.  Sure enough, these hearts and flowers worked fairly well, so I stuck attached them to wooden skewers like lollipops, and stuck them into the cake. 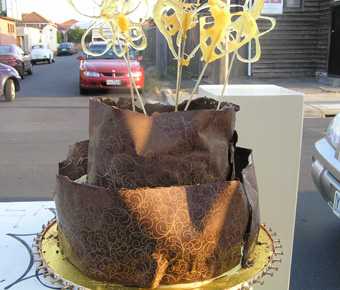 Rustic. That’s what they call it. Maybe even ‘rustically charming’.

Last time I made a cake like this, I put the berries on at home, and arrived at the party looking like a cross between Lady Macbeth and all her victims (well, victims by proxy, but that wouldn’t make nearly such a good sentence), with red juice all over my hands and dress, so this time I’d decided to put the final touches to the cake on at the venue.  Of course, we still had to get the cake to the venue, which was easier said than done – the car was hot, the chocolate collars were melting and trying to collapse, and the toffee lollipops were getting suspiciously shiny.

So we waited a bit.  And tried to keep the cake in sufficient shade not to melt.  And entertained passers-by.  And I tried to pretend that the cake actually looked good, which was an utter lie… 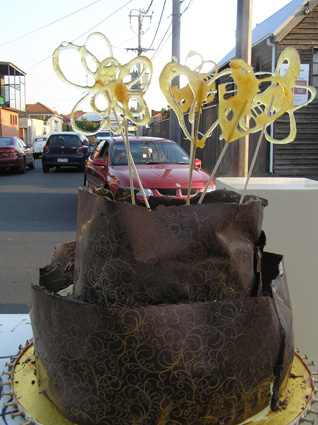 Brunswick is known for the quality of its street food…

And finally (really after only ten minutes or so), the bride and groom arrived, and I was able to get the cake inside and fix the damage and cover the bits that couldn’t be fixed with berries and edible flowers… 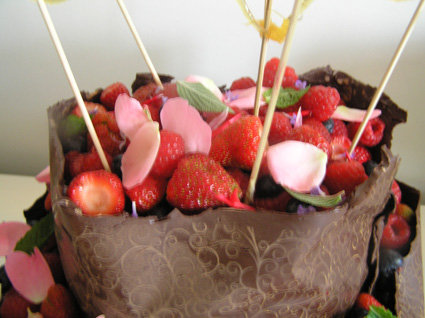 … and it actually looked good. 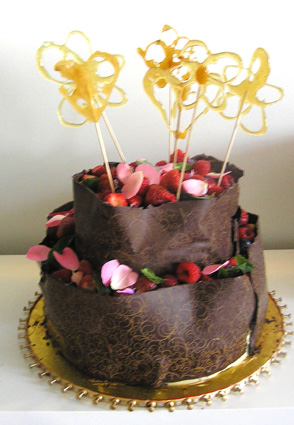 Not too bad. Still a bit rustic, though…

Better still, the large cake turned out to be one of the best cakes I’ve made, and even the small cake was quite good, though not as good as I had hoped.  And the toffee-lollipops were a huge hit with the various children. 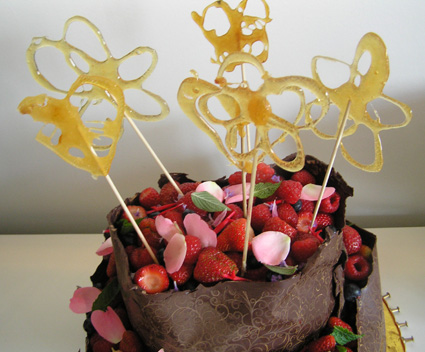 Who doesn’t love a toffee lollipop?

So I did not, in fact, shame myself in front of 2/3 of my colleagues, which was a great relief, and more importantly, the bride and groom loved the cake, which both looked and tasted as they had hoped. 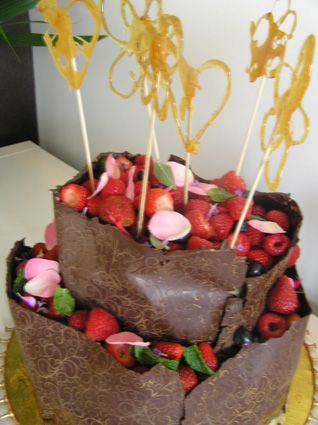 And we all lived happily ever after, and ate a lot of cake, which is a pretty happy way to live ever after, if you ask me… 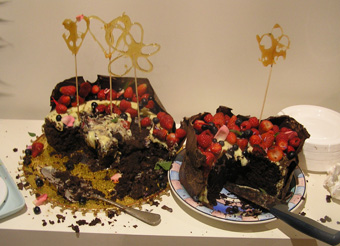 Congratulations to my lovely colleagues! May today be the first of many wonderful days together!