I still love this play.  My friends and I saw the Branagh / Thompson version of this at the end of Year 12 (it was part of our big outing after our last day), and adored it then, too.  Though we were the only ones in the cinema laughing at most of the jokes, which was a little sad.  For everyone else… 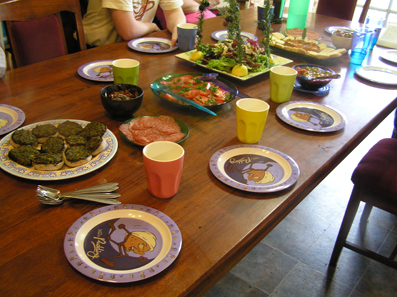 Warning: Here be truly horrible puns.  You have been warned.

Florentines and hearts… themes in this play.

We’ve actually done Much Ado About Nothing before – it’s a re-run, because As You Like It requires a fair number of people who are willing to sing, and we couldn’t get enough of our singers corralled for this weekend.  Last time, I read Beatrice – this time I was Benedick, and let me tell you, the view is very different from there. 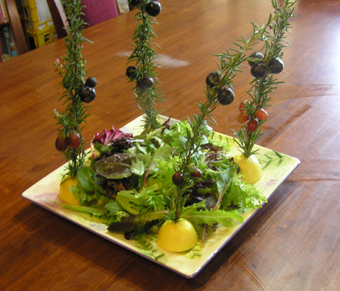 Renaissance garden salad, with trees for Benedick to hide behind and overhear things that may be important…

One can’t help being aware, when reading these plays, of the restrictions and constraints faced by even the strongest and cleverest women Shakespeare wrote.  But there’s nothing like reading a male leading role – and especially the role of a reasonably wealthy, upper-class man- to really highlight that realisation.

Civil as an orange, and something of that jealous complexion. (Or jellied complexion, as the case may be…)

The world is Benedick’s oyster, in a way that it will never be Beatrice’s, and reading him, I had this sense of boundless freedom, of opportunities and possibilities, of just being able to do anything I chose with my life – something I’ve never felt in reality.  And now I sort of want to read Beatrice again – all Shakespeare’s heroines again, really – because if that’s what they are up against, no wonder so many of them have such sharp tongues.  Their words are pretty much the only weapons they have.

Marinated eggplant. Not to be confused with oysters.

Anyway.  There is definitely much feminist ranting to be had from this play, but this is my cooking blog, not my feminist rant blog (and now I want a feminist rant blog), so perhaps I’ll leave it at that for now.  I still love the play, of course.  Though my desire to write the version where Hero tells Claudio exactly what he can do with his suspicions, his really unnecessarily cruel response to them (I mean, I can see calling off the marriage if you think your partner has been unfaithful, but is public humiliation really necessary?)  and his second offer of marriage is definitely getting stronger.

This is not the kind of Florentine that Claudio is.

(I find the only way I can envisage a happy ending for Hero in this play is by assuming that Claudio is now feeling so very, very guilty, and also so very, very wrong, that he will never so much as look at her cross-eyed again and will spend the next twenty years or so atoning.  Then again, what was Hero thinking falling in love someone called Claudio in the first place?  Going anywhere near a Claudio in a Shakespeare play is never a winning move.)

OK, sorry, my dislike of Claudio got the better of me there.  Sorry.  Where was I again?  Ah yes, food… 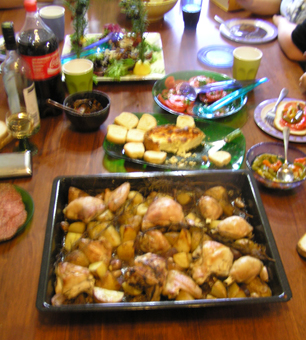 This play is in Messina, Sicily, so I had a vaguely Italian theme, but mostly my food was just about making puns on the characters’ names or personalities. I started off with the aforementioned florentines for Claudio, and then looked around for Benedick.  Mostly, he gets described by Beatrice in highly unflattering terms, but the exchange in which it is said that he is ‘stuffed full of good qualities’ and she retorts ‘very true: he is a stuffed man’ was rather irresistible.   I made him some mushrooms stuffed with pesto. 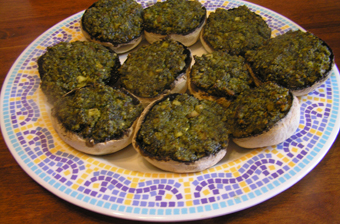 Beatrice is made of rather sterner stuff, and she is all about wordplay, so for her I made a chocolate and beetroot cake – rich, complex, and with a lovely dense texture (not that Beatrice is dense by any stretch of the imagination).

Chocolate and beetroot cake, for Beetrice.

As for the other characters, I didn’t really make too many puns on their names, but given the Italian theme it was inevitable that I get some salami to represent Don Pedro – Is Don. Is Good. 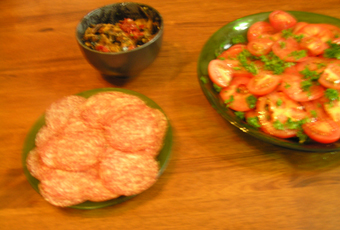 Unless, of course, you are Don John, in which you are a plain speaking villain who cannot be represented by salami.

Then I started looking through the text for other ideas. I liked Beatrice’s remark about Benedick giving her a double heart in exchange for her single one, so I made heart-shaped butter biscuits and sandwiched them together in pairs with jam before baking.  They didn’t look very heart-like, after baking, alas but they were rather lovely nonetheless.

Double hearts for Beatrice and Benedick. I am tempted to say that the raspberry jam represents blood…

The Rocky Road, aside from representing the contents of Claudio’s skull (to be fair, there are a few similarly-minded people in this play), could also represent the path of true love which never did run smooth, though that was in a Midsummer Night’s Dream, of course…  And speaking of people with an insufficiency of mental matter, there was one other character who had a platter of food in his honour… 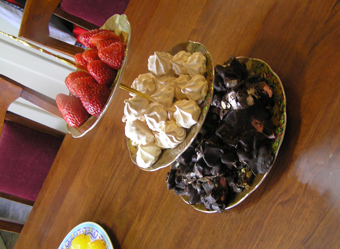 Strawberries for Dogberry. Because he deserves them.

The next thing that sprang out from the text was ‘civil as an orange and something of that jealous complexion’, which made no sense at all to me the first time I heard it (and if it still makes no sense to you, consider that ‘civil’ sounds rather like ‘Seville’, a kind of bitter orange, and go from there).  I made orange cakes last time, so this time I decided to go for sour orange and lemon jellies.  Which really did not want to come out of their moulds, alas. 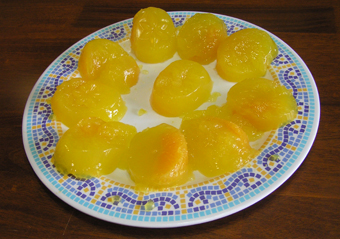 Not the most elegant orange jellies I’ve ever seen…

Aside from that, though, they were pretty good – lovely and tart and just what we needed to counteract all the other rich sweets. 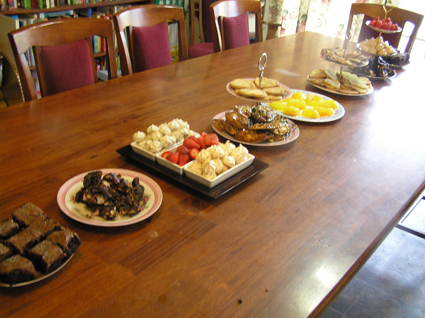 I may possibly have got carried away with the sweets…

At this point in the planning process it occurred to me that I might possibly have enough sweets now, and should possibly be considering what sort of savouries might work well in this feast.

It was, of course, necessary to have an orchard in which Benedick, and later Beatrice, could hide to hear what was said of them.  I have this lovely recipe for a ‘Renaissance Garden Salad’, which looks terribly impressive but is actually very easy to make, so I brought it out again.  Beatrice and I had a lovely time hiding behind our rosemary trees.

The orchard, in which many things are overheard.

The trouble is that the dried fruit in this particular salad makes it fairly sweet too – actually kind of appropriate for Sicilian cooking, which tends to put raisins and oranges in otherwise savoury dishes – but I thought we needed a few things that were straightforwardly savoury.  I haven’t made baked ricotta for a while, so that was my next step.

I feel you can’t have a Mediterranean play without olives, even though I don’t really like them, and my local Greek deli had some lovely green Sicilian olives – perfect for my needs!  They also had marinated eggplant, which I cheated and bought.

Assorted olives – the bright green ones are from Sicily.

The marinated peppers (another Sicilian  staple), however, I made myself.

My friend G. was bringing bread, so I didn’t need to worry too much about that.  But I did want a bit more protein on the table, so I decided to bring out the lovely Diana Henry recipe for chicken roasted with potatoes, rosemary and garlic.  This is very much like the way my Nonna used to roast chicken, which is authentic enough for me.  Also, chicken was highly appropriate to this play, what with Leonato referring to Hero as his chick, and of course all the fowl play. 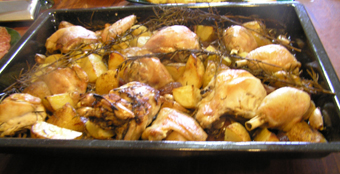 What, all my pretty chickens and their – damn! Wrong play…

At that point, I felt there really was very nearly enough food, so I just made a tomato salad and left it at that.

No tomato puns spring to mind.  You can thank me later.

I was actually really pleased with the balance of food and flavours in this meal.  I don’t really count the desserts, because I knew full well that I was making far too many of them (I always do, but sweets are so much more fun to cook than savouries).  I like creating a feast where you can, if you choose, actually have a nice, healthy, well-balanced meal (lots of vegetables to choose from and some good quality proteins and carbohydrates), before going nuts on the sweets.  Which is sort of the point.

And I like being able to look at that table full of food and note that there was enough there that was gluten-free, vegetarian, dairy-free or even vegan that just about anyone could have made a good meal out of it.  As it happens, I was only catering for egg, nut and onion allergies this time around, but it’s the principle of the thing (I do so much cooking around allergies that I now feel both guilty and decadent if I make a cake that includes butter, eggs and nuts all at the same time).

But it’s still all about the desserts.