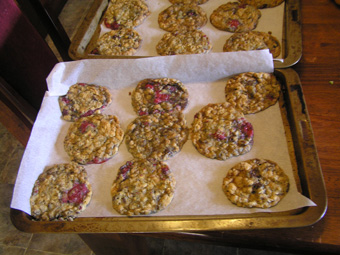 My alarm went off on Sunday morning just as I was in the middle of dictating a recipe for vegan choc-chip cookies to my Italian cousin Rosangela, whom I haven’t seen for nearly 30 years, and who, moreover, lives in Milan and may not even speak English.  For some inexplicable reason she was at my Oma’s house and had just realised that she had a friend coming for lunch whose birthday it was, and the friend was vegan. Since I was at my Oma’s house, I didn’t have any vegan cookbooks available, so I started adapting my standard choc-chip cookie recipe to veganise it.  I woke up at the point where we had decided that, in the absence of raspberries, we would use frozen brumbleberries – a product I am fairly certain does not exist, and which undoubtedly does not look like giant purple strawberries.

Anyway, after that I wanted to find out if the recipe was any good.  Especially as my sleeping brain had actually remembered that 1 egg = 60g apple sauce (though it had some odd ideas about other quantities – 60g each of butter and sugar, and then 100g of raspberries and 150g of chocolate might taste good, but will never work in real life).  Here’s the adaptation my waking mind came up with.

Preheat the oven to 175°C, and line two baking trays with baking paper.

Cream the margarine, oil and sugar together with the apple sauce and vanilla.  Mix in the oats, then the flour, bicarb and baking powder.

Gently stir in the chocolate and raspberries, trying not to let the raspberries break up too much (good luck with that).

Collect the mixture into rather messy balls – mine were nearly golf ball size and this is too big, but they were messy.  Refrigeration for half an hour might help.  Or not, as the case may be. Anyway, put them *well* apart on the baking trays.  These cookies will spread. 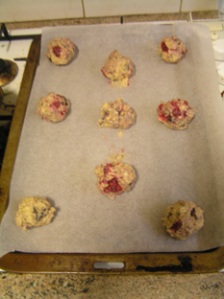 This is not far enough apart.

Bake for about 15 minutes, or until browned and mostly set.  Leave at least 5 more minutes on their trays before attempting to get them off the trays onto a wire rack to cool.  They will stick like you wouldn’t believe.

Eat!  These cookies are very soft and crumbly, and probably won’t keep too well, as they are so moist.  So you’d better eat them at once!!  Also, I suspect I used a bit too much chocolate, and raspberry  and that this was the source of the general lack of structural integrity displayed.  Perhaps this would work better as a slice?

I really don’t see how a gluten-free flour could work any less well than what I did here.  And the recipe is already vegan and nut-free, of course. I think if I were creating this recipe while awake, I’d use dried cherries or freeze-dried raspberries, rather than something so moist as frozen raspberries, but I wanted to know what would happen if I followed my dream recipe…

If you have access to frozen brumbleberries, you should certainly try using them and let me know how they taste.