Well, that was really rather a satisfactory Eurovision.  I actually liked Sweden quite a bit, and while I still feel that Turkey and Iceland were robbed, there was a very pleasing mix of the truly bizarre (moonwalking bagpipe players?)  with the unexpectedly good, and not too many power ballads, either.  And for once neither Italy or France embarrassed me (and I did approve of France’s decision to garnish their number with attractive and topless gymnasts).  No costume reveals, but other than that, it was a very good effort, and definitely one of the best Eurovisions I’ve seen

I’m in the throes of a horrible lurgy, so I haven’t been feeling very inventive, culinarily (hence all the desserts with nary a savoury dish in sight.  Savoury is much harder to be creative with).  This meant no painstaking research of Azerbaijani cuisine with a view to feasting thematically.  Instead, I made up a giant pot of vegetarian chilli, cooking the beans in my new pressure cooker (and this deserves a post of its own, because I am so very excited about being able to cook beans without soaking them first), baked a lot of potatoes, and put out salsa, guacamole, grated cheese and corn chips.  Simple.

Still, a Eurovision gathering, however small, requires a suitable dessert, and I believe I may have found, if not the perfect Eurovision dessert, certainly one of the most apt.  This dessert was born when I looked at Nigella’s recipe for Grasshopper Pie and thought – yes, but how can I make this *more* unnatural? (I suspect I am the only person in the world who would ask that particular question…)

For one thing, it’s quite unnaturally blue.  For another, it is exceedingly alcoholic (thus obviating the need for a drinking game – you can simply take a bite of the tart any time there is a key change, or an all-white costume, or a wind machine…).  For a third, it is ridiculously sweet, a bit tacky, and has absolutely no redeeming nutritional value.  (I will leave the parallel to the reader). In short, it embodies the magnificent excess, silliness, sweetness, artificiality and need for alcoholic stimulation that encapsulates Eurovision.  And, in case that wasn’t enough,it has a costume reveal!  Not a very good one, but I can’t blame Eurovision for that.

Also, it’s really easy to make.  And rather tasty, in a my God, I am eating blue curaçao mixed with marshmallows and coated with chocolate kind of way…

Oh, and one last thing.  I should probably confess that I actually like Eurovision.  I even watch it sober (blue curaçao tarts aside).  You may all feel free to laugh at my terrible taste now.  But it’s not about the singing – it’s about the outrageous performances and the sheer strange variety – you really never know what you are going to get – baking grannies, red-cordial-fueled twins, or bat-dancers forming themselves into a boat.  It’s sheer delight, even when it’s horrific.  How could anyone not love that?

Make the base: put the biscuits and chocolate in a food processor and turn into crumbs.   Add the butter, and process until it clumps together.  If you are me, fail to read the recipe properly, mix all of it in together, despair of it ever working and wind up working the butter in with your fingers.

Press all over the base and sides of a fluted 25cm (ish?) tart tin with a loose base (you really want the loose base), and put in the fridge to firm up while you do unnatural things with marshmallows.

Put the marshmallows in a saucepan with milk and stir over low heat until they melt.  Awesome.  Add the blue curaçao, pausing to admire the truly dreadful effect.  You may wish to add blue food colouring at this point –  I didn’t, and I must say, the blueness of this tart was a bit more subtle than I would have preferred for Eurovision purposes.  Though it was still pretty blue.

Whip the cream until soft peaks form (ie, you want it to hold its shape when you lift the beaters, but as soon as it does this, stop beating, because you don’t want butter.  Though blue, marshmallowy butter would certainly have entertainment value.

Pour your great blueness into the cream, and fold in until it is all light and incorporated and beautiful – I have to say, while this dessert is a *terrible* idea, its texture is gorgeous – then spoon into the biscuit crust.  Decorate with little silver balls, if you like, and refrigerate for at least 4 hours.

Now make the over layer for your costume reveal!  This is fairly easy, though I still mucked it up somewhat.

Draw a circle the size of the top of the tart onto a piece of baking paper, and put this piece of paper drawing-side-down on a tray (you should still be able to see the circle, but you won’t end up with lovely graphite- or ink-flavoured chocolate this way).

Melt the 125 g of chocolate in the microwave – 50% power in 1 minute bursts for 3-5 minutes usually does it for me, and spread evenly over the circle you drew on the baking paper.  Press smarties or other colourful sweets over the chocolate circle in a formation that appeals to you, and put the tray in the fridge to firm up.  If you were classier than me, you would use tempered chocolate for this part, and wouldn’t need to refrigerate it.  Are you classier then me?

If you were not classier than me, but were nonetheless brighter than me, you would make sure the tray was flat and the chocolate disc wasn’t bent half upward, thus ruining your disguise for the pie.  I recommend this level of brightness, though I cannot attain it.

If you are super-duper cunning, you could make your chocolate in two half discs, so that when it comes to the costume reveal, you can press on the centre and the discs will come up like butterflies.  This was never going to work for me, but I am particularly un-co-ordinated – you might have better luck.

Once the tart is set, carefully remove it from its tin – this is where you are glad you used one with a loose bottom.  It will actually come away from the bottom of the tin quite well, if you are a bit cunning with a cake lift or two.  Put it onto a plate.

When the chocolate is set, gently peel the paper from the back of it, and lay it over the top of the tart. 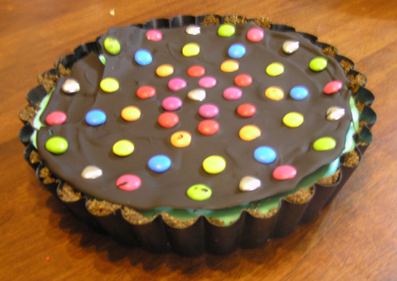 It looks so innocent…

To do your great Costume Reveal, you can do one of several things – whip off the chocolate to reveal the blue, creamy tart; smash the chocolate with a hammer (dramatic, but probably not a good idea), or simply break the top in two.

Frankly, if there have been enough white costumes, wind-machines, Ethnic Dancing (TM) and Eurovision Key Changes, your guests are going to be impressed no matter what you do at this point… 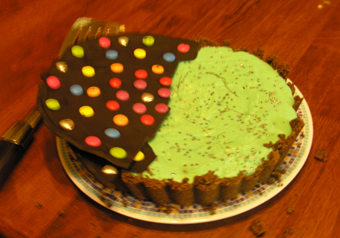 The great reveal – don’t forget to take a drink! (I bet there’s a key-change, too)

The original Grasshopper Pie is, I think, better in a strict culinary sense.  But it isn’t as blue.  And really, there are a lot of other cocktail or alcohol combinations that would work.  I suspect if one was fond of Fra Angelico or Baileys, they would both be lovely here (possibly even in combination).  I’ve made a non-alcoholic strawberry version of this recipe, too.

This tart is eggless, but I don’t know if it could be made dairy-free; I’ve heard that if you chill coconut milk overnight, you can whip it like cream, but this hasn’t worked when I’ve tried it (perhaps coconut milk is a little different in the US?).  I’m not sure whether there are good soy whipped cream alternatives out there – since all the cream is doing is adding lightness, richness and aeration to the mixture, any non-dairy cream that whipped up well would do.

For a gluten-free version, gluten-free biscuits are easy enough to find; marshmallows need to be checked to see whether they contain wheat-based glucose or corn-based (Pascals are wheat-based, and thus no good to my gluten-free friends).

Sadly, the marshmallows render this non-vegetarian, and I suspect vegan marshmallows wouldn’t hold up properly if re-heated.  I’ll have to play with agar some more and get back to you.  Also, from memory, vegan marshmallows are ridiculously sweet, and this dessert is already pretty sweet, so that might be too much of a good thing. 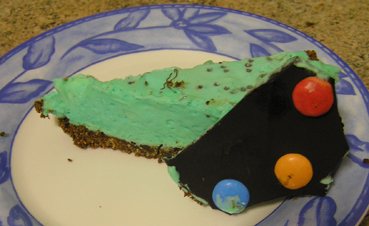 It really is quite blue.

Albania – 8 points for bringing the opera to Eurovision, and the jazz, too, along with the weirdest key change in Eurovision history.  And also for the hair.

PS – I also loved Sweden, but so did everyone else in Europe, so I’m going to assume you’ve already seen that one.  And you must check out the Russian Babushkas, who are adorable and cook on stage.  And Jedward, bless their sugar-fueled souls (I think their veins run with red cordial – neat.).  And France, of course.  And… you know, this was just an awesome year for Eurovision, that’s all.