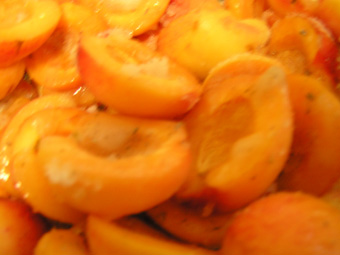 I am such a lunatic right now.  I’m bouncing off the walls and giggling madly at the completely insane set of tasks ahead of me this month.  And then someone sends me an email mentioning shiny metallic food paint and I want it right now!  I don’t need red food colouring – this is all natural.  Lucky Andrew… But December is never for sleeping if you’re a choir person, so it’s really hard to convince myself that this is a bad idea.

I’m also bouncing off the walls because I made a really, really delicious dinner, which included perfectly cooked steak (always surprising, since I make steak very, very rarely) on a lovely salad with asparagus and roasted peppers and and homemade roast garlic aioli, just in passing, because I had roast garlic and an egg yolk to use up, and it was all *really good* and the flavours balanced perfectly, but alas, I’ll never be able to replicate it, because I made it up as I went along.  So that’s not the recipe you’re getting.

Instead, you are getting the one which I actually bothered to measure and photograph as I went.  I even dictated all the quantities to my long-suffering Andrew.  I haven’t actually eaten this yet, because we only had dinner half an hour ago, but I know already that this is going to be one of the good desserts.  The apricots are beautifully fresh – my former boss’s wife has a cherry and apricot farm, and she brings produce into work to sell (I swapped a bag of jellies for a kilo of apricots), and I couldn’t resist using the lavender sugar I bought yesterday.  And then I thought, I haven’t done a gluten-free recipe for a while, so it’s gluten-free, too.  It’s a close relative of the Spring rhubarb crumble, but we’ve moved on from spring now.  I hope you enjoy it as much as we’re going to.

1 kg apricots
2 tablespoons lavender sugar (or just add a teaspoon or two of dried culinary lavender to the rest of the sugar)
1/4 cup caster sugar + 50 g sugar for the topping
75 g butter or nuttelex
150 g coarse almond meal
50 g popped amaranth (it was in the pantry)
25 g shredded coconut (and I didn’t even know I had this, but why not?)

Halve and stone your apricots, and put them in a nice glass baking dish with the lavender sugar and 1/4 cup of caster sugar.  Toss around a bit. 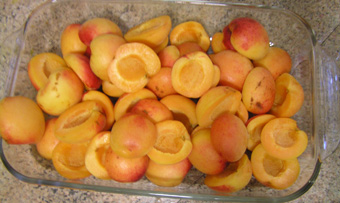 Soften the butter in the microwave, and use your hands to work it into all the other ingredients.

I’d leave this to cool for 10 minutes before eating – Summer is no time for food that’s piping hot.  Serve with icecream.

Any stone fruit would be marvellous here.  If you can’t find popped amaranth, more coconut would do nicely, I’d think – amaranth has a slightly tropical flavour and light texture which would match fairly well.

You could also just bake the apricots with the lavender sugar and sugar, under some foil, and serve hot, warm or cold with icecream.  Or puree and put through cream, yoghurt or soy yoghurt for an apricot and lavender fool.  Which, come to think of it, you could then churn in an ice-cream maker to make ice-cream, though you’d probably want to add a bit more sugar first.  Now I want to do that.

This recipe is already gluten-free and vegan; if you want to do without nuts as well, you could always replace the ground almonds with self-raising flour, for a more traditional (and gluten-full) crumble, but I think you’d do better to just choose a standard crumble topping recipe that you like.

Honey or agave nectar might be nice instead of the sugar, but watch it, because it will brown very fast if you use either of these.