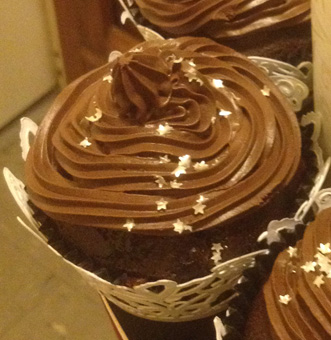 These cupcakes are a bit of a shock to the system.  I freely admit to being a chilli wimp, but even I thought the original pasilla chilli cupcakes were a bit too mild.

So I decided to spice them up with an injection of hot chilli ganache to the centre.  And then I decided to add a chipotle chilli mousse, which was the point at which I discovered that I could only eat a few bites of them before reaching chilli overload.

My chilli-head friends, however, fell on these cupcakes with cries of joy, and since there is something to be said for the notion that if one is going to make a chocolate chilli cupcake, one might as well make sure that the cupcake packs a good strong punch of both, these cupcakes should do the trick.  Please bear in mind, though, that the amounts of chilli are very much suggestions, and somewhat vague ones at that – I’m operating rather from memory here.

For anyone who is interested, the main cake recipe is slightly adapted from my Chocolate Chilli Cupcakes for Everyone from a couple of months back, and the amazing chocolate and tofu mousse is adapted from Vegan Cupcakes Take Over The World, though adding chilli to it was entirely my idea…

Stir the vinegar into the rice milk in a large bowl, and leave to curdle for 5 minutes or so.

Pre-heat the oven to 180°C and line a 12-hole muffin tin with paper cases.

Stir the sunflower oil and sugar into the milk mixture, then sift in the flour, spices, cocoa, salt and leavening agents.  Mix together well (there is no gluten to over-work, so you really can go no-holds-barred with this), and spoon into the paper cases.  Bake for around 20 minutes, or until they pass the skewer test.

Cool on a rack while you prepare the filling.

For the filling, break the chocolate into small pieces and melt gently in a saucepan with the rice cream or rice milk, stirring until smooth.  Add the chilli gradually, tasting as you go, until you get the spice level you require.  You want the filling reasonably hot, I think.

Let the filling cool enough to thicken a bit, and pour into a piping bag fitted with a plain, narrow nozzle.  Now for the fun part – press the nozzle into the centre of a cupcake, and squeeze the piping bag to inject chocolate sauce into the centre of the cake.  The cake will start to swell up when it is full (if you go too far, it will crack open, which can be covered up easily enough, but I recommend going slowly enough that the cake doesn’t actually explode).  Repeat this with the rest of the cupcakes.  You will probably have ganache leftover, and I won’t tell anyone if you eat it directly from the bag.

Now make the mousse, which is really amazingly cool.  Drain the tofu, and put it in a blender with everything except the chocolate, and blend until smooth.  Meanwhile, melt the chocolate (I do this in the microwave – 50% power and 1 minute bursts, stirring in between).  If your blender is a powerful one, pour the chocolate in and blend together.  If your blender is crap like my old one, the chocolate will probably thicken too much on contact to blend at all, so your best bet is to pour the tofu mixture into a large bowl with the melted chocolate and go at it with electric beaters until well-combined.  It gets lovely and glossy and not at all like tofu – amazing stuff.

The Vegan Cupcake ladies suggest refrigerating this mousse until ready to use, but I wouldn’t – it is pretty solid stuff, and I found that putting it into a piping bag and piping it onto the cake was actually pretty hard work even at this temperature, so I’d do that straightaway, before it gets altogether impossible.  You should have enough mousse to pipe a great big tower of the stuff onto each cake, nicely disguising any cracks or semi-explosions you made with the ganache.

Serve – but do warn people about the chillli.  It is quite strong. 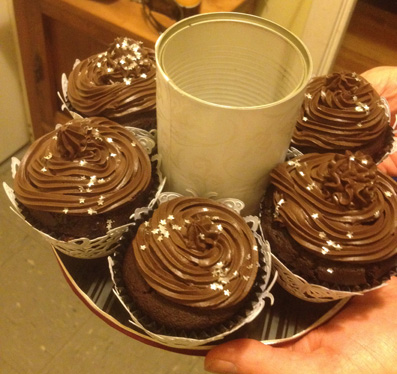 These cakes are vegan, gluten-free, nut-free and low fructose.  As George Calombaris probably wouldn’t say in this context, it doesn’t get any better than that.  Well, low-GI would be even better, but I don’t think we can do much with that in this context (and especially with these portion sizes).

For goodness sake, taste as you go with the chilli, and make sure it’s at a level you like.  You can, of course, skip the chilli entirely and make it into a straightforwardly decadent chocolate cake.  Or you could use things like orange zest / cointreau, peppermint essence / creme de menthe or any other flavourings you liked instead of chilli.

You can, of course, replace rice milk with soy milk, but my understanding is that some people with fructose intolerance can manage tofu but not soy milk, due to the different preparation process, so this is worth checking before you start.  Equally, some people with fructose intolerance can’t manage maple syrup, so you might need to use a golden syrup or treacle in the mousse instead.  Treacle is a bit thick, but the flavour would work well, I think.

You can also just make the mousse on its own for any occasion you like.  Or use it as a tart filling.  Or spread it on toast.  OK, maybe not toast…

Don’t Do What I Have Done…
Recipe: Apple and Berry Crumble
Recipe: Almond and Berry Cake for a Big Birthday