Andrew does not like eggs.  It’s a character flaw, I agree, but what can you do?  Well, in my case, you just buy a smaller frying pan and continue on regardless, because sometimes, you just need an omelette and that’s that.  Single person omelettes are nicer, anyway, and anything that eliminates the delay in getting your omelette on the plate is a good thing.  Just ask the judge in Strong Poison.  Which, incidentally, you should certainly read if you have not done so,  because it is an excellent example of a how-dunnit (we figure out the identity of the poisoner quite early on) with rather glorious characters.  It also has quite a lot of talk about food and cooking, though since this is mostly in the context of ‘how did the victim get poisoned?’, I’m probably the only person in the world who remembers all those detailed descriptions *fondly* and kind of wants to make that chicken casserole and maybe a jam omelette, too…

(Incidentally, if you have read Strong Poison, I must also recommend to your attention the letters of Dorothy Sayers, which reveal, among other things, that she found the perfect therapy for getting over a wholly unsatisfactory ex-boyfriend – first, you write him into a book, then you poison him, and *then* you spend the rest of the book gleefully blackening his character until all your readers wish they could have poisoned him, too.  You go, girl!)

Anyway, I seem to have strayed a little from my topic, which is omelettes.  I have all these gorgeous Indian leftovers from last night, but today has been a very long day, and on such days, I don’t really want to eat food that challenges my palate on any level.  I want easy food, plain food, food that puts no unkind demands on my mind or my tongue or my digestion.  Food that I can eat – and cook – without thinking.

So Andrew gets the delectable leftovers and is welcome to them. I am having an omelette.

I’m not sure that this is a traditional omelette, but this is how my mother used to make them – and presumably still does, I just haven’t watched her cooking any omelette’s recently.  It’s fluffier than the thin french kind, but it’s definitely not a frittata either.  Whatever it is, it’s good.

(Sadly, I can provide no photographic evidence of this omelette.  This is for two reasons.  The first is that my camera decided to claim that its card was full partway through the cooking purpose.  The second, more shameful reason, is that for the first time in years, I completely failed to make an omelette that looked anything like an omelette.  Though it still tasted excellent.  But on the whole, I feel my camera picked a good time to misbehave…)

Break the eggs into a small bowl, and beat lightly with the water, salt and pepper – they don’t need to be absolutely and completely mixed, and many people feel that omelettes are much nicer when you don’t beat the water that much at all.  Stir in your chives, parmesan, or whatever, but don’t add too much, please.  Simplicity is the essence here.  The best omelette I ever made didn’t even have salt in it, because the eggs were so good and so fresh they didn’t need the help. 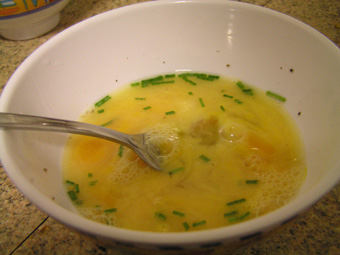 Get everything you plan to serve the omelette with ready now (I recommend a salad and little boiled potatoes or some toast), because an omelette should cook in under 2 minutes, and you don’t want it to wait around getting cold.

Put the butter in a small frying pan, one with a surface area about the same as your two hands held together to make a platter for some really nice eggs, and  heat until it is melted and just bubbling.  The heat should be medium high – good and hot, but not so hot that everything burns on sight. Incidentally, omelettes are worlds easier to make on a gas stove than an electric one – if you are using the latter, be prepared to take the omelette on and off the heat a lot.

Pour in the egg mixture, and let it cook for about ten seconds, until it’s beginning to set around the edges as though it were a pancake, which is not the result you want, incidentally, so don’t leave it too long.  Lift one edge a little and tilt the pan so that the uncooked egg runs underneath.   Lift the opposite edge and tilt the pan the other way, to let more uncooked egg hit the hot surface of the pan.  Continue doing this until the omelette is mostly cooked – it may be a little runny still on the surface.  Flip half the omelette over the other half to cook the surface a little more, then flip the whole thing onto a plate. 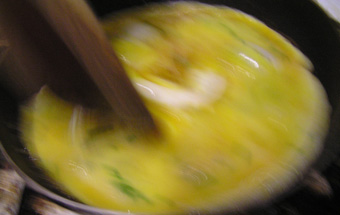 This is what happens when I try to take a photo one-handed in a dark kitchen while lifting the edge of an omelette to let the uncooked egg run underneath. It sort of shows that. Oh, well…

I’ve heard people put chopped up ham in omelettes.  I can’t imagine why anyone would ruin a perfectly good omelette that way, but if that’s what floats your boat, don’t let me stop you.  Any nice herbs or cheeses are good, and you can add a little ricotta for an even fluffier omelette.  Or ricotta mixed with spinach for a fluffy greenish omelette!

To turn this into a frittata, basically you add a whole lot more stuff to it, cook it at a lower heat, and don’t disturb it while it cooks.  And you use a larger pan.  You might, for example, sautée up some sliced onions, capsicums and parboiled potato slices (and chorizo or calabrese salami, if you like) in butter, then pour in the eggs, mix the whole lot around so that there is egg at the bottom and the top, and turn down the heat to let it set, running a spatula around the edges occasionally to loosen them.  I sometimes put a lid on it to help the process along.  Usually one finishes it under the grill, to make the top set.  This usually causes me to add some cheese to melt on the top, too.

Obviously, this meal is gluten-free, nut-free and vegetarian and can be dairy free quite happily, but it’s not vegan and I don’t think it ever can be.  It’s fairly low in fructose and low GI, though.  And it’s a very fast, satisfying meal on a summer’s evening.

If Dorothy Sayers is to be believed, you can also make a sweet omelette, adding a little sugar to the eggs and a dollop of hot jam just before you fold the omelette onto itself.  Which actually sounds strangely delicious.  But I’d advise leaving the arsenic out of the recipe…

← Why Indian Cooking is Not Friendly to Catherines
Farmers Market: Cooling Down →

2 comments for “Recipe: Omelette for One”