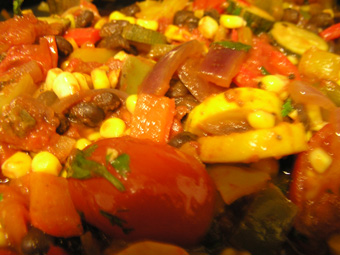 So I kind of accidentally got captured by the internet last night and then it was 8pm and I hadn’t really thought about dinner, except that it needed to include corn, and all my cookbooks were useless on the subject, so I had to randomly make up this stew, which I didn’t think was going to be all that good.  Only then it was really good, so I had to write down the recipe and take bad photos of what was left in the pan, which is why the photos in this blog post are less than stellar.  But I promise you, the stew itself is lovely.

This meal is a very simple sauté-turned-stew of the kind of late-summer vegetables that I associate with the Americas.  I suspect it is vaguely Mexican, but I only suspect that because I know nothing about Mexican cooking… Anyway, it’s very easy to make, and also terribly healthy, as well as being gluten-free, vegan and low-GI, but it’s basic purpose was to do something with the corn I had bought at the Farmers’ Market as soon as possible, since corn is one of those vegetables that loses flavour within minutes of being picked (or so I am told – I’ve never grown corn, which means, I suppose, that I don’t actually know what it should taste like, really).

Also, it’s very pretty!  Look at all those lovely colours!

olive oil
4 cloves garlic, crushed
2 red onions, chopped (I cut them in half through the root, then in half again across the equator, then I slice them into what would be half-moons if it weren’t for the equatorial slicing)
1 red chilli, finely chopped
1 tbsp cumin (or thereabouts – I wasn’t measuring)
1 tbsp oregano
1 tsp ground chilli
1 pinch of ground fennel seeds
salt, pepper
3 capsicums, all in different colours, chopped
1 sweet yellow chilli, chopped
kernels from 3 cobs corn
6 little zucchini, some yellow, some green (about 3 normal-sized zucchini, I should think), sliced
150 g cherry tomatoes, halved
2 tins chopped tomatoes
1 tin black beans
small handful coriander, chopped
guacamole, corn chips or cornbread, and grated cheese (to serve)

Get out your largest skillet.  I mean it – this is a lot of veggies, and you can expect to serve 6 people or more with this meal.

Heat a little olive oil in the skillet, and sauté the garlic and onion over medium heat until beginning to soften.  Add the herbs and spices (except the fresh coriander).  Once you have the onions going, if you are reasonably fast at chopping vegetables, you can just do what I did and chop and add as you go.

Chop up the red chilli, then the sweet chilli and the capsicums, adding them to the pan as you go.  Slice up your zucchini and add them in, stirring everything around every so often.  Next put in your corn cernels and your cherry tomatoes.  Let everything bubble around a bit, then add in the 2 tins of tomatoes with their juices, and the tin of black beans (without its juices).  Now would be a good time to taste the stew to see how you like the spice levels etc, but just be aware that it’s going to taste a lot less acidic once the tomatoes have had a chance to stew and mellow a bit.

Turn the heat down to low, cover or partially cover, and leave for half an hour or so, while you go off to write in your blog, and then read political blogs which make your blood boil rather more freely than the stew, until you suddenly realise that it’s 9:30 and you haven’t had dinner yet.  Oops.

Taste again, add the coriander and serve with tortilla chips or cornbread, or over rice, if that’s how you like to do things, and with a bit of grated cheese and / or guacamole or even salsa – most Mexican-style accompaniments will work well here. 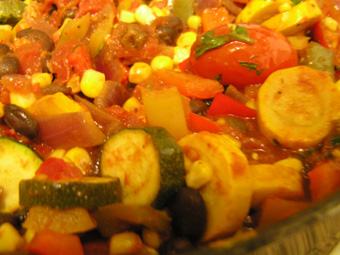 This is such a made-it-up-as-I-went-along meal that it’s difficult to think of variations, because it’s really a matter of doing whatever you like.  Adding or subtracting vegetables, changing the type of beans, or adjusting the quantities to match what you have in your fridge or garden will be fine, and do feel free to come up with better spice combinations, because I really know nothing of this spice palette.  Though I think chipotle pepper would be lovely, and if I’d had any, I would definitely have used it. And I have a feeling that Cajun spices would also be rather good in this context.

Just play around with it and enjoy – short of burning it, you really aren’t going to go too far wrong. 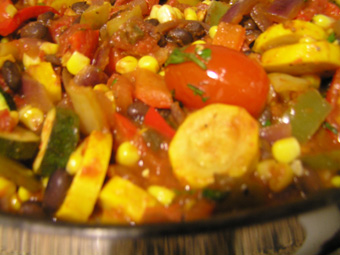