When I saw those glorious mushrooms at the Farmers’ Market on Sunday, I knew exactly what I’d be having for dinner sometime this week. This is basically a particularly glorious toasted sandwich, but I tend to think of it as a vegetarian hamburger, which means I get to serve it with salt and vinegar chips (any excuse is a good excuse for chips).  The cheese, while luscious, can easily be omitted if you are avoiding dairy – believe me, there’s plenty of flavour left, though I’d probably consider adding some caramelised onions or some grilled eggplant or both.  Then again, I considered adding both those things today, too, but sanity (and the realisation that we would never be able to fit the sandwiches into our mouths) prevailed.  I suspect this would be nice as an untoasted sandwich, but it’s so, so, good just as it is!

Two red capsicums – try to get ones with fairly flat sides, it will make your life easier.  This will give you leftovers, but you can always find a use for roasted capsicums.
Olive oil
3-4 cloves of garlic
1 bunch of greens – I used chinese broccoli, but spinach or kale would both be wonderful
2 enormous, gorgeous mushrooms
1 sprig of rosemary
4 thick slices of mozzarella – Gruyere or Jarlsberg would be phenomenal here.  About 150g – you’re eating lots of healthy vegetables, you can afford to be indulgent!
1 tomato
Four large slices of pasta dura or sourdough bread, or two good bread rolls

First, roast your capsicums.  I usually stand them on their bases, and look at them from above – they will either look like squares or like triangles (sort of).  I then cut each ‘side’ of the polygon off the core, and then cut off the base – this gives me five reasonably flat pieces.  Are you confused yet?  Put them on a paper-lined tray under the grill, and grill until the skins are well blackened and the capsicums are soft. 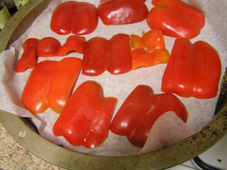 While you are waiting for this to happen, prepare the greens.  Wash them, remove the stems, and chop them roughly.  Crush two of the garlic cloves and sauté briefly in a little olive oil, then add the greens and stir around until just wilted.  Take off the heat and keep warm, if possible. 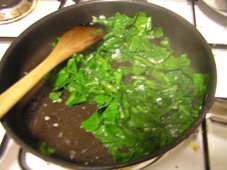 Prepare your mushrooms.  I peel them, because it’s fun, but you don’t have to.  Remove the stems, stand nonexistent-stem-side down, and cut little slits in the cap.  Slice the rest of your garlic, and pull little sprigs off the rosemary, and stuff them into the slits in the mushrooms, they way you might do if you were making roast lamb.  Cut the bread, and slice the mozzarella.

OK, your capsicums should be nicely blackened now.  Take them out of the oven and put them in a bowl, covered tightly with gladwrap – this will help steam the skins off. 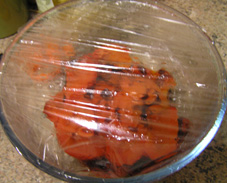 Put your mushrooms and bread on a tray (actually, separate trays might be better – my bread got a little soggy from mushroom juices.  On the other hand, my bread tasted like roasted mushrooms – you win some, you lose some).  Sprinkle everything with salt and pepper and drizzle with olive oil.

Grill until the bread is lightly toasted on both sides.  Remove two of the slices of bread, pop the cheese on the other two, and let it melt.  By this stage, your mushrooms should be nicely grilled / roasted (my grill is in the oven). 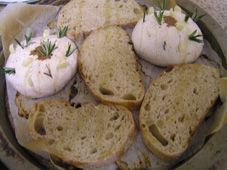 Meanwhile, slice the tomatoes.  Now you are going to have to get the skins off the capsicums, which is the part where I always burn myself.  Basically, if you rub at the skins where they are blistered, they should detach from the capsicums, generally in just one or two pieces.  This only works if they have been roasted long enough, and it’s too late now if they aren’t!  But partly grilled capsicums are nice too, so don’t fret.

Cut the capsicum into strips, and put a layer of them onto your toasted bread (if you are a mayonnaise sort of person, you could spread mayonnaise on the bread first).  Then pile on some greens, and then the sliced tomatoes. (You will have leftover garlicky greens and leftover roast capsicums, both of which will be lovely in sandwiches for work tomorrow).

Next, add your grilled mushrooms, and put the cheesy toast on top.  Eat with joy, and also with chips.