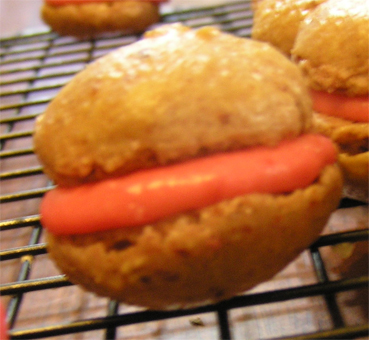 I seem to be on a roll with gluten-free recipes at present.  I’m not sure why that is, but there you have it.

I’m going to start by acknowledging that these macarons lack something in looks.  One might say they lack everything in looks, in fact – no foot, and they are kind of on the lumpy side.  This would be because I have never made macarons before *and* didn’t follow the recipe (I know you are all swooning with shock at this remark), but I’m actually so delighted with the flavours and texture I wound up with that I’m posting the recipe anyway.  I can work on the looks another time…

These macarons were inspired by my discovery of freeze-dried fruit powders in a local shop – strawberry and blueberry.  These are surprisingly vivid both in colour and taste, and completely dry, making them ideal for imparting flavour to macaron shells, which aren’t going to work if you add much in the way of liquid.  Then, I had a bunch of leftover egg-whites from making lemon curd last weekend.   I really couldn’t face making meringues after all those sponge cakes, but my Hermé Macaron book suggests using ‘liquefied’ egg-white which has sat in the fridge for about a week before use, so I cheerfully set them aside for experiments this weekend.

These macarons are chewy and moist and very strongly flavoured with fruit.  I’ve put together the blueberry ones with a violet-scented white chocolate ganache that turned out to be an inspired combination, and the strawberry ones were sandwiched with a raspberry buttercream – less inspiring, but pleasingly tangy.

Note that you will need four piping bags for this recipe, and at least one plain nozzle.

For the shells
4 egg whites, separated the night before, or up to a week in advance (they will be fine in the fridge for this time, and they are really strangely unelastic, completely unlike your usual egg-white texture)
265 g icing sugar, sifted, and I really mean this.
1 1/3 cups ground almonds (the finest ground you can get)
2 tablespoons strawberry powder
2 tablespoons blueberry powder
3 tablespoons caster sugar
For the violet filling

100 g white chocolate
2 tablespoons thickened cream
a few drops of violet essence (sorry, the number of drops really does depend on how strong your essence is, so I can’t tell you)
a few drops of purple food colouring
For the raspberry filling
40 g butter, softened
1/2 cup icing sugar – sifted again
50 g raspberries (frozen is fine, but defrost them)

It’s up to you whether you want to halve your recipe from the start or not.  Choose wisely!  What I did was get out two bowls and sift half of the icing sugar and almond meal into one and half into the other.  And then I sifted in the strawberry powder into one bowl and the blueberry into the other and set them aside while I dealt with the egg-whites.

Actually, I didn’t set them aside until I’d mixed the powders in a bit, to see how bright the colours turned out.  And I may have used slightly more fruit powder than this – I’m afraid I didn’t measure the powders strictly.  Go with whatever suits your taste.

Beat the egg-whites until you have fairly stiff peaks, then beat in the caster sugar until it is dissolved.  This won’t take long.  Weigh out half of the eggwhite mixture into each bowl (or do the egg whites in two batches – perfectly valid), and fold them thoroughly into the almond mixture.

Put each lot of batter into a piping bag with a plain nozzle (about 1 – 1.5 cm), and pipe into 4cm circles on a baking tray lined with greaseproof paper.  (This won’t actually stop the macarons from sticking, so please don’t get your hopes up, but it will make the washing up less of a nightmare.) You don’t have to be ridiculously precise about your circles, but bear in mind that you want to sandwich these things together, so ideally you want about the same amount of mixture in each spot.

All the books say to bang the tray down so that the macarons spread and lose their little tail on top.  Ha.  Like that works.  This batter is a bit stiff, frankly.  When I do Version 1.1, I will probably add another egg-white to counterbalance the fruit powder.  Anyway, pipe them onto the trays in a formation that isn’t too dome-like, and give them some room to spread.  About 3 cm leeway is plenty.

Let them stand at room temperature for at least fifteen minutes and up to an hour – you want them not to feel sticky when you poke at them.  I believe this is called developing a skin, and helps with developing a foot.  I studied embryology and I can tell you it doesn’t work like that, but there you have it.

When your macarons have rested and developed any body parts they see fit, put them into the oven and bake for 20 minutes or until dryish – not meringue-level, but not all mushy.  They will still be a bit moist in the middle, but that’s an asset.  You can put a couple of trays in the oven at once, incidentally – this will increase the cooking time, but will not harm them in any other way.

While the macarons are cooling down, make the fillings.

The violet ganache is ridiculously easy.  Chop up your white chocolate (Cadbury, surprisingly, has rather good white chocolate buds in their cooking chocolate range these days) and put it in a small, microwave-friendly bowl with the cream.  Microwave on 50% for about a minute, stirring halfway through.  That was long enough for the whole lot to melt in my microwave; if your ganache isn’t melted yet, give it another few seconds until it is.

Stir together the ganache mixture to distribute the cream, then add your violet essence and colouring.  Put into a piping bag, let cool for twenty minutes or so (or you will find it too runny to use) and pipe a couple of teaspoons onto the flat sides of half of the blueberry macarons, then sandwich them together with the rest of the macarons. 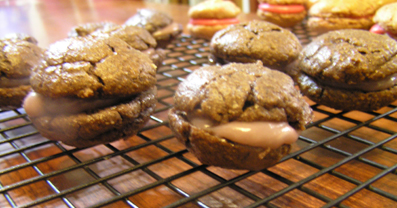 For the raspberry filling, smash up the raspberries with butter using a fork.  Sift in the icing sugar, mix everything well, and put into another piping bag.  This will be the filling for the strawberry macarons. 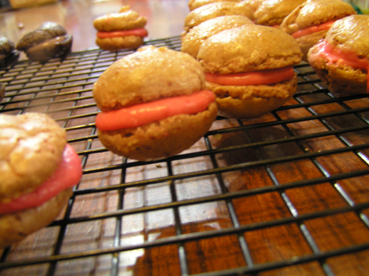 Macarons are naturally gluten- and dairy-free (with a suitable filling), but you are never going to make them without nuts or eggs.  I don’t think a low-GI macaron is on the horizon either.  You could make these low fructose by taking out the fruit powders, and use a few drops of vanilla essence, or perhaps a little cinnamon (with an apple or pear filling) instead, and then fill them with chocolate ganache. If you are going for dairy-free, make your ganache with soy milk or rice milk – you’d be surprised how well this works.  Almond milk or coconut milk would also be good, but they do have distinct flavours, and particularly if you are making something like the violet ganache, you don’t want any extra flavours around that might overwhelm the violet.

You could also have a lot of fun with ground pistachios, hazelnuts or walnuts instead of hazelnuts – I’d probably take out the fruit powders for those, too.  And if you find any other fruit powders they would be fun to play with – just pick a complementary flavour for your filling.  Lemon curd would make an excellent filling for a fairly plain macaron (and would have the advantage of generating egg-whites for use in your macaron shells) or for the strawberry ones, and of course a plain chocolate ganache would be particularly good with hazelnut macarons.

I’m very tempted to see what happens if I use ground cacao nibs instead of ground almonds.  Would such macarons hold together?  Maybe this is an experiment for next weekend…

(Incidentally, these macarons were, in the end, based on Margaret Fulton and not Pierre Hermé, whose method is far more elaborate than Fulton’s and involves making an Italian meringue.  His macarons look much more perfect and restauranty, but I was rather intimidated by the method, at least for a first try.  Maybe another time?  I’d probably have to actually follow the recipe properly, though, which would be trying…) 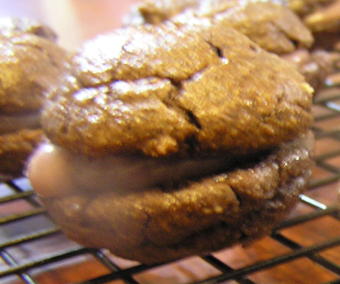 Brutto ma buono – my blueberry and violet macaron is as ugly as sin, but tastes deicious…