I’m still playing with my Nigella Lawson app.  And yes, it’s 7:30 in the morning, which is a stupid time to be baking, but I woke up at 6:00 when I realised we hadn’t put the bins out, and once you’ve dashed in and out of the house a few times and trodden on something sharp and been tripped by rapidly exiting cats, there’s not much point in trying to go back to sleep.  I thought I’d be super-organised and do mise-en-place for tonight’s dinner, but there’s only so much you can do when the supermarket didn’t have most of the ingredients last night.  Also, I can’t face washing and dealing with greens at this hour.

So that leaves baking.  I was going to just do Nigella’s Chocoloat Cookies by following the recipe (I know, I know), but I had this over-ripe banana waiting to be used, which meant I could replace the egg, and at that point, one might as well veganise things entirely.  And then I didn’t have the right kind of sugar, so I changed that, too.  Though now I’m kicking myself for not using the chocolate-ginger sugar I bought at Gewürzhaus on the weekend, because I can smell how good that would have been.  These cookies also narrowly escaped getting smarties or chilli chocolate chunks (actually, the latter would also have been excellent), but I did eventually find suitable plain chocolate to put in them.

Anyway, they are very soft (a little fragile, in fact, though they hold together much better than I had expected), very chocolatey, and quite bananaish, but you can absolutely claim that they are healthy because they have fruit *and* oats *and* dark chocolate, all of which are very good for you (and we’ll just pretend we didn’t see all that butter / nuttelex and sugar)…

100 g butter or Nuttelex (dairy-free margarine), softened
25 g brown sugar
100 g raw caster sugar with vanilla bean, or just raw caster sugar and add a splash of vanilla later.  I’m not actually as posh as that sounds, I’m just currently keeping my vanilla beans in the raw sugar,  so that they don’t get lonely.  Also, you could go half and half caster and brown sugar if you don’t have access to raw caster sugar.
1 over-ripe banana
75 g oats (see!  healthy!)
75 g flour
40 g cocoa
1/2 tsp bicarb
1/2 tsp baking powder
125 g chopped up chocolate, whatever you have around the house will work (ie, you could get away with chopped chocolate bars, or smarties, but good dark chocolate is great, and if it’s infused with something warm like orange or ginger or spices, that would be fabulous

Pre-heat the oven to 180°C, and line two baking sheets with paper.  I love the way I say this, just as though I’m not going to be frantically running around looking for baking paper when the whole mixture is done and ready to go on trays…

Beat together your butter and sugar until well combined.  Mash in the banana, and beat well.  The mixture will seem terribly stiff at first, rather like Captain Von Trapp at the beginning of the Sound of Music, but it will loosen up over time.  Singing to it will help.  Maybe.  Now would be a good time to add vanilla, if using.

Dump in all the rest of the ingredients except the chocolate, and mix well.  This will give you a fairly sticky cookie batter.  Mix in the chocolate chunks.

Roll the mixture into balls about the size of walnuts, and space well apart on trays, because they really do spread out and will annex Austria if you aren’t careful (sorry, just continuing the Sound of Music theme.  That was probably in poor taste, but I’m too sleep-deprived to be sure…).

Bake for about 15 minutes, or until they have spread out and no longer look sticky on top.  They will still be quite soft.  Let them cool on their trays for five minutes, or until you can get them off the trays without them disintegrating into their component parts, much like the Von Trapp family in that ‘So Long, Farewell’ song at the end of the musical.  That is possibly the worst metaphor I have ever used on this blog, but I have no regrets.  Also, I have no idea why I am suddenly obsessed with The Sound of Music.

Cool on racks, and then eat.  For breakfast, if need be. 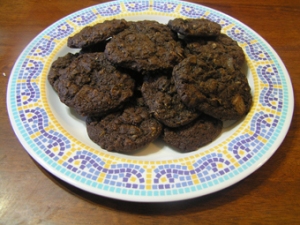 I can’t do variations this early in the morning.  But you could definitely add a bit of ginger or cinnamon to this recipe without doing it any harm.  Slightly more awake Catherine says: You could add nuts, if you liked, or glacé ginger.  And the more I think about these, the more I think they are crying out for spices – I have this spiced cocoa mixture that I think would work brilliantly to replace some of the cocoa here.  I think these cookies are a bit too fragile for a single gluten-free flour, but they should work with whatever your standard mix is.

I will add photos later… ETA: I did!