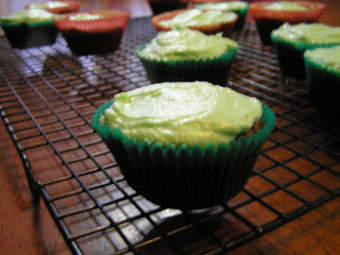 Why are these cakes green? You may well ask…

What I really want to do is set up a series of purple cake experiments, in which I test the various variables and see what colours the cakes come out.  But that’s a lot of carrot cake for two people to get through, and even amusing colouring will grow old if you have four dozen carrot cupcakes to get through.  So I decided instead to start by focus on making the most purple carrot cake I could.  Not blue – I wanted to do some vegan (ish – these plans work better if you actually have soy yoghurt in the house) baking for a change, and besides, egg-whites can drive cake over the edge into green, and I’ve already done that.  And not pink.  Pink is far too easy.  So purple it would be, then.

Not to put too fine a point on it, I failed.  My batter wound up an alarming (but nonetheless entertaining) shade of deep blue-grey, which I thought was rather promising, but the cooked cake was just a particularly deep brown in colour.  Clearly, using brown sugar was a mistake.  On the other hand, the flavour was excellent.  Hence this blog post – because really, these are some of the nicest carrot cakes I’ve had.  And they are very nearly vegan (and dead easy to veganise, as you will see)!

Preheat the oven to 180 °C and line a 12-cup standard muffin tin with paper cases.  You may want to spray the cases with olive oil, as these cakes are sticky.  I’m happy to lick cake out of paper cases, so I didn’t bother.

In a medium-sized bowl, mix together the sugar, oil, sour cream and vanilla until smooth.  Sift in the flour, bicarb and baking soda, salt and spices.  Don’t be afraid to mess with the quantities or types of spices.

Really, this is pretty purple stuff. And my hands are *still* purple from handling those carrots, even though I’ve washed them several times. You’d think the batter would be purple, wouldn’t you?

Mix in the grated carrot, dried fruit and cacao nibs, and spoon the mixture into paper cases.  Doesn’t it look dreadful?  Nothing says ‘mad kitchen chemist’ like a blueish-grey cake batter.

Fear the grey cake batter of evil!  I must say, rarely have I cooked anything that looked this unappetising to start with.

Bake for 25 minutes or so, until done.

Purple carrot cakes, looking disappointingly like the ordinary kind made from orange carrots.

Let the cakes cool in their cases on a rack, and ice when cool with anything you like, really, but I like cream cheese icing, so that’s the recipe you’re getting here.

Beat together your softened cream cheese and butter (you may need to microwave them a bit to get them soft) with the lemon zest until smooth, then sift in the icing sugar and stir together well.  Add some blue food colouring in order to assuage your disappointment over the boring colour of the finished cakes.  Spread the icing over the cooled cakes and eat them.

Yum indeed, but definitely not purple, or even grey…

Well, you can veganise this easily enough with soy yoghurt and pretendy cream cheese (it’s late at night when I’m writing this, so I can’t remember the name – yes, this is a pre-written post, I’m afraid.  Hello, readers from the future!), and I should think it would work well with any gluten free flour mix you liked, or even with plain quinoa – there just isn’t all that much flour in this recipe, relatively speaking, and it’s not doing much.  Almond meal might work, too.  And do use whatever dried fruit or nuts appeal to you – I was just trying to maximise my odds of purpleness.

But it would be much more fun to vary this recipe to make it more colourful.  I suspect that adding egg whites will only make it greyer, but one might use white sugar, to get more contrast in the batter, and you could see what happens if you added lemon juice.  Or orange juice.  Or blood orange juice!  I may well try this myself, sometime.  But if you try it first, do let me know how it turns out…

This is just a completely gratuitous gloat – don’t you wish your lunchbox was as colourful as mine? All that pretty veg, and the pumpkin kibbeh from the weekend, and of course a carrot cupcake (as part of a healthy, balanced diet…).