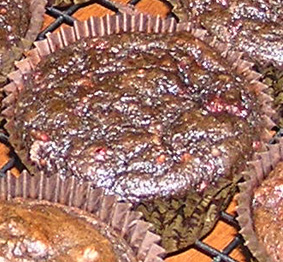 Today my workplace is holding the Australia’s Biggest Morning Tea, a cancer research fundraiser which is very popular with hungry scientists!  Since I work in a medical research institute looking after a couple of cancer research Divisions, we take this pretty seriously.  (Actually, my Divisions take cake pretty seriously no matter what the reason…) One of my closest friends at work can’t eat eggs, and another can’t eat dairy, so after my delight in the Chocolate, Raspberry and Coconut Spread the other day, I thought I’d try making a vegan cupcake along similar lines… and I’m very glad I did, because these are really yummy!

Preheat the oven to 175°C, and line 12 muffin tins with paper cases (actually, I made this recipe three times as large, because it was for a work thing, and also for dessert last night, and what if there isn’t enough food?).

Put the coconut milk in a bowl with the cider vinegar, and mix well.  Mash the raspberries well, and mix in with the sugar and canola oil.  Add in a teaspoon or so of vanilla essence (to taste), and a few drops of raspberry essence or flavouring if you had it.  Raspberry liqueur would also work here (but doesn’t it always?).

Divide the batter among your twelve muffin cases – a heaped dessertspoon in each was about right when I did it – and bake for 20-25 minutes, depending on your oven. 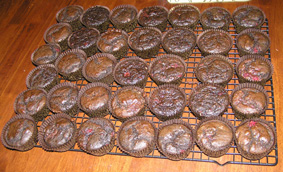 Let the cakes cool on a rack, while you prepare the icing. 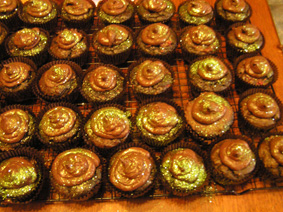 The icing bears a more-than-passing resemblance to the aforementioned chocolate, coconut and raspberry spread.  Smash up your raspberries very well, then melt your chocolate gently with the coconut milk.  Mix the whole lot together, and maybe add some raspberry essence or liqueur if you have it.  Let cool until it is fairly thick, and then either spoon onto the cakes, or pipe on.  If, like me, you have an obsession with edible glitter, sprinkle a little of this on top.

Eat just as they are, or if you are trying to pretend that dessert is healthy tonight, you can have a cupcake with a poached pear and some ice-cream. 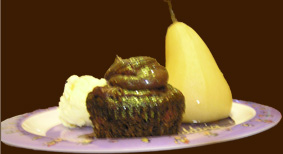 Also, don’t you like my pretendy-cooking-magazine presentation?  This is because I am a terrible photographer who took my best picture with all sorts of rubbish in the background, so I photoshopped it onto a plain background.  Very classy, I think  (though perhaps not the Magic Pudding plate)…