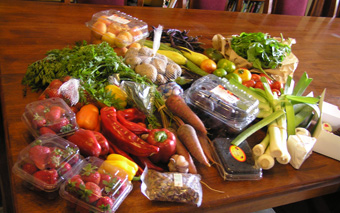 Well, that’s Melbourne for you.  Actually, I much prefer summer when it’s masquerading as autumn, so this title should not be taken as an aspersion on my lovely city’s lovely weather.

This post is a bit late, and will probably get later again, because my week has been eaten by a combination of grant applications by day and music by night  – the King’s Singers are in Australia for the first time in 28 years, and I went to their Masterclass yesterday (I was in the third row, too – *swoon*), and then a friend very kindly bought me tickets to their concert tomorrow as an early birthday present, which has me bouncing off the walls with excitement and not doing a very good job of talking about anything else.  My scientists are quite amused.

This is where the King’s Singers are! No, not on my kitchen table.  (That really wasn’t as funny as you thought it was, you know.) It’s not so much that I’m feeling patriotic as that I had all these green and yellow vegetables…

And back at home I am doing terrifying domestic things like cleaning out the freezer (if I can’t remember what that box contained, it probably isn’t edible anymore) and fridge in preparation for Lent.  And for being able to find things.  Cooking is thus rather functional in nature at present, though the apricots baked with white wine and vanilla last night deserve a better adjective…

All of which is straying terribly away from a really lovely market day with so many gloriously coloured fruits and vegetables, and several vendors I hadn’t met before.

Why are there so many songs about vegetables and what’s on the other side (of the plate)? Kermit wants to know. So do I.

By far the most exciting thing about Sunday’s market was the presence of a new stallholder who specialises in stone fruit.  The one thing I’ve found disappointing about this market is the fact that they have basically one stall selling apples, pears, and the odd quince; one selling oranges and blood oranges and tangellos, and the odd stall selling berries in season.  This was one of the things I mentioned when the market convenor asked me what stalls I’d like to see more of, so I was delighted to see a stall full of peaches, nectarines, apricots, and plums of many colours.

Many people are unaware that purple food is quite fond of folk dancing (unlike red food, which is more into marching bands).

The stallholder made a quite determined effort to either get us to buy everything or to come and visit his orchard (where, no doubt, we would be even more strongly encouraged to buy everything).  We may do that sometime.  I was simply thrilled to get the very last apricots of the season and blood plums like the ones I grew up with.  Though the bright yellow plums very nearly seduced me.  Maybe next fortnight. 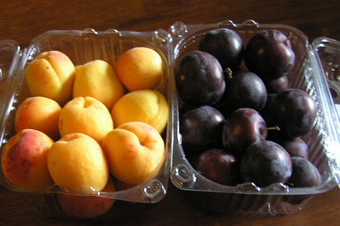 Phwoar, nice plums! (I’m sorry, I really, really, mostly tried not to go there but I couldn’t help myself.)

I had eggs, so I didn’t really need to visit the egg-man, but he also had  freshly dried bay leaves (is that even possible?), which is something I haven’t seen before.  I actually have an ancient roman recipe for little cakes (biscuits, really) with a bay leaf pressed into the base of each, so I know just what I’ll be doing with these.  Also, they were rather pretty.

All the puns I could come up with to caption this photo were so bad that even I wasn’t willing to put them in this blog.

We are now on the opposite week from my lovely Italian lady, and will be until May, when we will be back in sync with her, just in time for the cardoons.  So no more quail eggs or zucchini flowers just now.  But my colourful vegetable stall was back in force, with tomatoes of many colours, purple beans, yellow and striped zucchini, baby leeks, pink-purple carrots, roma tomatoes, lebanese eggplants, and rocket.  I bought… pretty much some of everything.

So many vegetables in startling colours! You can see why I adore this stall…

The tomato lady was back, which meant that I had to buy even more tomatoes, and also capsicums, because I really love those long red ones, and our supermarket and greengrocer don’t tend to have them.

There was a chap there selling lots of different kinds of pistachios and insisting we taste them all.  This was actually fairly fascinating, until I realised that my favourites of the lot were the boring variety that everyone sells.  I am such a pleb. 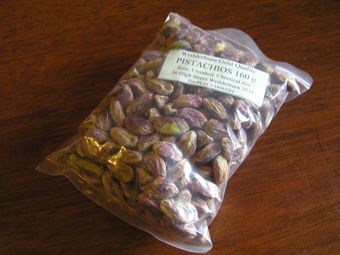 Plebean pistachios. You’d never catch a roman emperor eating one of these, even if the skins *are* purple.

Still, I’m pretty sure nuts are an important part of this whole vegetarian thing, so I bought my plebean pistachios (I do like that alliteration) and continued on my way, trusting that nobody would see me and take away my foodie badge.  Not that I have a foodie badge.  I’m a terrible foodie, because my tastes are terribly middle-of-the-road – I just cook for picky eaters and people with allergies…

This is not my foodie badge. Though it is vaguely reminiscent of the Illuminati. Are the apricots engaged in some sort of government-undermining conspiracy? Should someone tell the capsicum to watch its step? Or is it, in fact, the ringleader?

Potato man’s wife was here again this week.  Apparently, they don’t have any purple potatoes this year, which makes me very sad.  They do, however, have pink-eye potatoes, which are apparently very popular in Tasmania.  The stallholder told me that they keep on getting people asking if they have pink eye.  I expressed concern for the poor potatoes with conjunctivitis, and she looked at me as though I was slightly insane.  Clearly she doesn’t know me very well, or she would realise that I am far more than *slightly* insane. 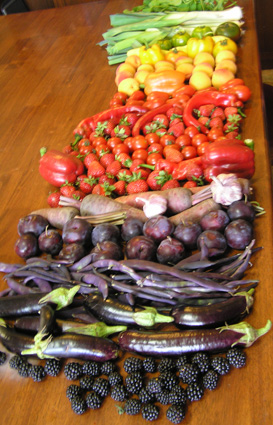 I was looking for the proper photo to illustrate my claims to insanity, but you know, just about any of them would do…

I don’t need three punnets of strawberries. But if they will price them at $10 for three, what’s a girl to do?

A new vendor this week was a Frenchman from near the Swiss border who sells French-style cheeses.  I’m not really one for just eating cheese (I like it melted on things, see aforementioned notes on my plebean tastes), but I really, really liked the ones he had made, especially the one which was a lot like raclette.  Indeed, it reminded me a great deal of the cheese we used to stink out half the Institute at our Australia Day lunch.  Irresistible. Also, opportunity to speak French!  You would think the thrill of this would wear off with all the French people where I work, but it doesn’t…

Cheeeeeeeeeese.  Yeah, I really like this cheese, stinks and all.

And then, because we had been very, very good marketers and bought our fruit and vegetables and still had some money left, we were allowed to buy CAKES. 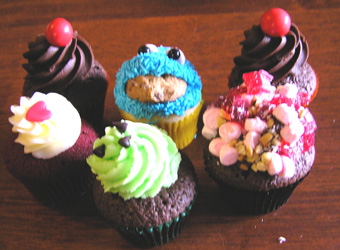 It’s not that I can’t make cupcakes. It’s that these cupcakes are irresistibly cute.

And really, I have to end with a close up of the Cookie Monster cupcake, because I really do think that is the most awesome cupcake ever.  I’m going to have to make some myself, I think.  Maybe some other muppets too, but hehas a cookie in his mouth.  How awesome is that?

Very awesome.  Can you deny it?  Of course you can’t.

Yeah, I thought so too.