Nobody reading this will be surprised to hear that when my brother invited me to lunch, my first remark was “Great, I’ll make bread!”.  My brother gently indicated that sourdough bread might not go so well with the Mexican meal he was planning, at which point I remembered that purple cornflour I bought at Casa Iberica, and said “Great!  I’ll make purple cornbread!”

Cornbread is not, as it happens, something I make very often, and I do not actually have a standard recipe for it, but that’s what the internet is for, right?  So I googled ‘blue cornbread’, just in case purple cornmeal behaves differently to the ordinary yellow kind.  There were a lot of recipes that combined cornflour and wheat flour, but this struck me as both inauthentic and not nearly purple enough, so I kept looking until I found one that contained only blue cornflour and no wheat flour at all.

The recipe called for 1 1/2 cups of cornflour, a tablespoon of sugar, half a teaspoon of baking powder, a little salt, an egg, 3/4 cup of milk and a couple of tablespoons of vegetable oil.  I added some paella spice, because why not, mixed my dry ingredients and my wet ingredients together and got… this. 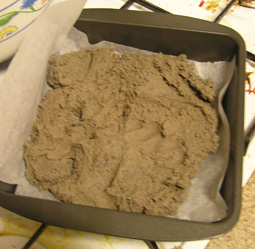 Not actually mud, despite appearances.

It turns out that purple cornflour absorbs liquid really, really well. Kind of like polenta on speed.  The whole thing stiffened up in seconds from slush to something I could barely spread into the baking tin.  Also, the egg-whites are alkaline, so hello anthocyanin reaction that turns my cornbread a truly unappetising colour!

This was not too promising, but I decided I’d put it in the oven anyway, on the off-chance it would work, and started another batch.

This time, I added two eggs, a bit more milk, and some ordinary yellow polenta to the mix.  The result was a slight improvement – it was still a bit too stiff, but it did spread a bit, and the colour was much better, if you like your food in a moderately alarming shade of bright forest green. 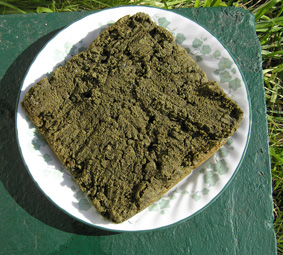 This photo really does not do justice to how green the cornbread was. And it was even greener inside!

You’ll notice it still looks like a mudpie. Just one made from more fetching mud.

The flavour was quite pleasing, though, which was a good thing, because it was far too late to make another batch (and also, I’d used up all my purple cornflour).  And even the texture was surprisingly OK, if a little on the stodgy side.

I have to say, though, that my sister-in-law’s cupcakes were far prettier.  Also, they looked like what they were supposed to be.  And they were very tasty, too.  See, this is what makes me such a lovely guest –  not only do I absolutely love it when people cook for me (it doesn’t happen very often) (because I entice everyone around here to be fed instead), but while I may not be able to resist bringing something, I have the excellent good manners to bring something that looks like it was made by a five year old with too much food colouring on their hands, just to make absolutely sure you don’t feel intimidated. Isn’t that charming of me? 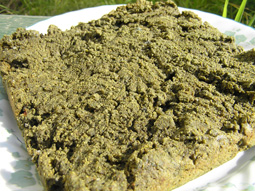 It really was pretty hilariously green…

(Naturally, this has nothing to do with the fact that I get bored really, really easily and don’t like baking the same dish twice, which means that I am at the mercy of my cookbooks and can perpetrate some pretty spectacular disasters…)

5 comments for “In which I am unintimidating”