This is possibly the most protracted post I’ve ever written, in terms of how many days I’ve spent trying to get it done! Basically, I drastically underestimated the interest I was going to get in confectionery and I have been drowning in a sea of sugar since the weekend (part of me is tempted to close off orders now, since I’m over 100 and still going strong.  Part of me, however, is irresistibly curious about just how crazy this is going to get.  So far, the unwisely curious side is winning…).  And every moment not spent on confectionery has been spent singing advent carols, organising Christmas parties and Christmas Choir at work, and compiling a musical Advent Calendar over on my online journal.

But I am determined to get these photos and reflections up tonight, before it all gets even further out of hand and I forget what I even did.  And I promise, there will be recipes this week… but first I need to make endless batches of confectionery and write my Christmas letter, and maybe even sleep occasionally…

It doesn’t feel like summer yet, but the colour palette (I nearly wrote palate, which would be somewhat appropriate too) is definitely moving Summer-wards.  If I look at my photos from September, or August, or June, the colours are quite different – browns and leafy greens, and the odd shot of yellow or purple for winter, and light, bright greens and yellows and pinkish reds in spring.  Now, though, we have the red of raspberries and strawberries and tomatoes, deeper greens of leek and broccoli and snap peas (no more asparagus, alas), and even the purple of garlic and eggplant.  Gradually, the season has changed.  Even Melbourne can provide enough continuity over time that the vegetables notice… 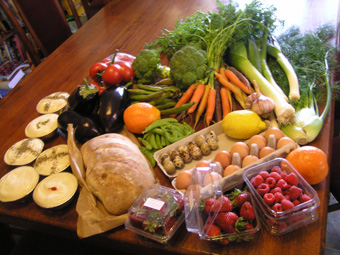 My first stop on Sunday was for pies – the last we’ll get until March, when the pie lady is back from Christmas and also from hospital. Nothing serious, I’m told, just some elective surgery.  We don’t really know her very well, but we’ll certainly miss her, because her pies are amazing.

One thing I’m enjoying about these markets is the sense of food being connected to real people: the butter lady disappears for a few months to have a baby, the pizza lady breaks her foot and so we don’t get pizza, the raspberry man is back after eight months when there were no berries to be had, and the Italian vegetable lady (whose name is, actually, Rita) tells me off for not coming in her weeks when my pay cycle gets out of sync with her market weeks, and brings quail eggs when it just so happens that her quails are laying.  Like, for example, this week.

She also had lovely broccoli and broad beans, which were looking a little sorry but tasted fantastic when she opened a pod for us to taste. And lovely frondy fennel which I had excellent plans for until I remembered after getting home that we had Advent carols in the evening (necessitating a dinner that can be prepared in advance, rather than the spring vegetable stew I had in mind).

Oh, and did I mention that the raspberries are back?  Fresh, sweet raspberries, all for me!  Well, and for Andrew, but he doesn’t love them the way I do.  Right at this moment, I have a Forgotten Pudding (the magic, easy version of a pavlova – you set the oven to high, beat eggwhites until fluffy and then add sugar and cream of tartar, put it in the oven, and then immediately  switch the oven off and go to work) sitting in my oven, waiting to be topped with raspberries and strawberries and yoghurt cream when I get home (yes, this paragraph is from yesterday and I must confess, it was written in lieu of an afternoon tea break because I was clutching at straws!  But on the bright side, I can assure you that the pudding was excellent.). 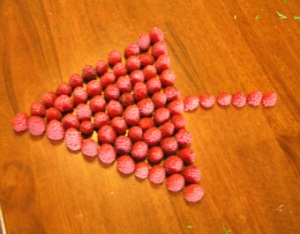 This way to summer!

(Also I’m hopelessly geeky, and am absolutely itching for someone to bring in blueberries or blackberries next time so that I can do a Berry Pascal’s Triangle.   Because what could possibly be cooler than a Pascal’s Triangle made from fruit?  Perhaps one made from Pascal marshmallows?  But I digress.) 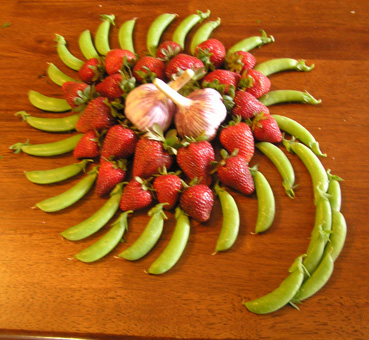 Purple Potato Man, who really needs a better name, still does not have potatoes.  But that’s OK, because he does have the best garlic in the world.  Also, excellent strawberries, and really lovely, fresh sugar snap peas.  I confessed that I really never have the first idea what to do with snap peas, and he opened a punnet, pulled one out and stringed it and gave it to us to eat, just as it was.  Crunchy and sweet and crisp.  I can cope with that.  We’ve ate them tonight (it’s Tuesday now) in a risotto with broad beans and leeks and asparagus and leftover roast chicken and roasted garlic.  Yum.

Gratuitous photo of eggplant, with eggs. Well, wouldn’t you?

And speaking of chicken, the woman with the glorious free-range chickens was there, and I spent a good ten minutes dithering over whether to buy one.  On the one hand, I love chicken, and hers are about the only ones I can get my hands on that I know are ethically raised.   And I probably won’t see her again until January, either.  On the other hand, I don’t have freezer space or time to joint a chicken, and did I really want to make roast chicken again?  The solution turned out to be yes, I did – I’ve been itching to try the idea of roast chicken with 40 cloves of garlic for years, and between the glorious garlic and the beautiful free-range chicken, it was irresistible. And, as it turned out, tasty.  And the chicken came with a free lemon… 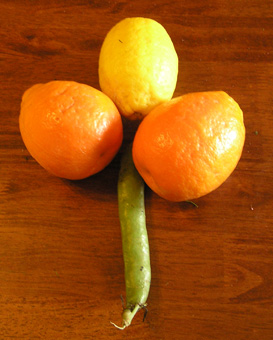 I was also looking for a plausible replacement for blood oranges for my endless confectionery, and Andrew needed a drink after eating dry broad beans, so we wondered over to the citrus shop for some tangellos and an orange juice.  There’s something very pleasing about the colour of tangellos – such a deep, sunlit orange.  And it turns out they make excellent confectionery.

Mum! It’s looking at me! Make it stop!

We went to the bread man for bread (I was already pondering roast chicken and scads of roast garlic and the need to mop it up with something.  I swear I didn’t realise the bread had a face until I got it home and it kept looking at me.  Somewhat disturbing, even if it does have a fairly cheerful mien.

And the tomato lady had eggplants!  I haven’t seen eggplants at this market before.  Andrew is convinced he has, but I’ve been specifically looking for them and haven’t found him, so I think he needs to ask himself why he is having eggplant-themed hallucinations.

No, I don’t know why I did that either.

Maybe it has something to do with their tendency to develop strange, trippy eggplant-cat faces?  Anyway, I was fairly excited about the eggplant, and expressed the fact that I didn’t even know where to start with it.  The tomato lady helpfully started giving me suggestions, and I had to explain that the problem was not a lack of ideas – it was far, far, far too many.  In the end, I made an Nightshade Gratin with eggplant, tomato, potato, and basil.  Despite the alarming title, there were no fatalities.  Except, perhaps, the tomatoes and the eggplant… (potatoes never die.  They just lie in wait, hauntingly, deviously, threateningly, plotting their future underground endeavours and giving people the evil eye.) (I may possibly be a little over-tired).

Then it was over to yet another vegetable store for beautifully-coloured carrots and leeks.  I never used leeks all that much in my pre-market days, but I have become addicted to them.  And broccoli, oddly.

And then it was home to eat pies for lunch, plot dinner parties, plan dinner, practice music, bake for Monday’s Cake Club, and, oh yes, make confectionery.  Lots of confectionery.  Do you know how much sugar I have used in the last week?  I believe I’m somewhere around the 20kg mark.  It’s rather frightening.

And that’s about it.  And now, I must go and cut up some jellies, or possibly work on my Christmas Letter.  Less than a week into December, and already it’s spiralling out of control…