Yes, I suppose that title does rather cry out for clarification.  I was just thinking that the beginning of May for us is pretty much Halloween, in terms of seasonality, but there were surprisingly few pumpkins about today, and those that were there were just nowhere near as fascinating as the other vegetables available.  So many of my favourite stall-holders were around today!

I’m back on the same weekends as the Italian vegetable lady, so I made a beeline to her stall and was rewarded not just with cardoons (which are my favourite thing about winter) but with quail eggs *and* zucchini flowers.  This is really not the time of year for zucchini flowers – they just don’t go in the same season as cardoons – but apparently they haven’t had any big frosts up her way yet, so there are still a few flowers about.

Zucchini flowers, in a bouquet with spinach, fennel, rapa and kale

That was a no-brainer for me – I happily bought zucchini flowers, quail eggs, cardoons, broccoli, wild fennel and rapa greens.  And tiny cherry tomatoes which really should not still be in season now that it’s turning cold, but I’ll make the most of them while they last.  Glorious.  We discussed my current fixation on sponge cakes (and how insane one would have to be to separate quail eggs – or at least, how insane one would be at the end of the process), and I eyed the artichokes sadly.  Artichokes are so beautiful, and every time I cook with them they make me want to cry with frustration.  About once a year, I’ll buy them anyway, but with cardoons at my fingertips, that time isn’t now.

Ritual dances of the quail egg, tomato, brussels sprout and shallot tribes. At the close of the dance, one brussels sprout (chosen for its superior size) will be sacrificed and EATEN with bechamel sauce and a little nutmeg to propitiate human cooks and discourage them from eating the other vegetables. This ritual is rarely, if ever, successful.

Another vegetable stall I hadn’t seen for a long time was there, with multicoloured baby carrots and radishes, coloured beetroot, peppers in many colours, and the most gloriously purple Russian kale.  And spinach, and red onions and leeks.  I eschewed the radishes and beetroot, but the rest was mine…

I love the colour of this kale

And there were pies!  We had to get pies! 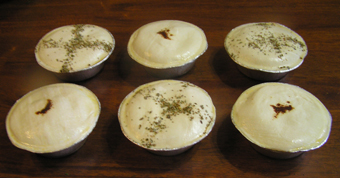 Strawberry season is over, but the potato chappie had rhubarb and shallots as well as the usual potatoes and garlic.  I decided on Dutch Cream potatoes this time, and of course garlic and rhubarb.  We haven’t had rhubarb for a while. 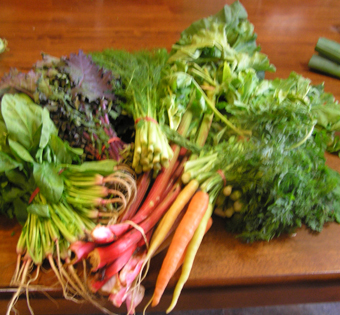 A french baker had chocolate croissants, which we grabbed for breakfast, and lovely onion rolls, which we have had before and liked very much – they went very nicely with our stuffed zucchini flowers for dinner last night.

The fish man was back, and I slunk over rather guiltily to get more rockling fillets.  I have to confess (rather shamefully) that I never did use the others – the combination of several very long and tiring days at work with guests and eating out meant that I was never quite game to experiment, and their best before date slipped by when I wasn’t looking.  These fish are going to be eaten on Wednesday, or I’ll know the reason why.

Loaves and fishes. Because it’s Sunday.

Then I saw that the chap who sells raspberries in summer had rhubarb that was seriously around a metre long – it would certainly go from my hip to above my head – and it really didn’t matter that I already had some rhubarb, because you can never have too much rhubarb, especially if it is Monstrous Elephant Rhubarb, so I got another bunch, exclaiming enthusiastically to the farmer about this.  I think he thought I was not quite right in the head, but I’m used to that. 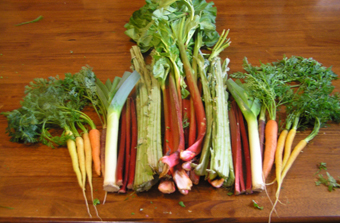 The line-up: carrots, leeks, cardoons, and rhubarb great and small…  Those leeks are ordinary-sized leeks – the rhubarb really is insanely long.

Then, because I didn’t have enough onions yet, I allowed myself to be seduced by bags of teeny tiny onions, the kind they always ask for in those slow stew recipes like beef bourgignon, and I can never find.  And teeny tiny brussels sprouts.  Seriously, this has to be a Melbourne thing, right?  A farmer’s market that has kale and cardoons and brussels sprouts at the same time as peppers and tomatoes and zuccini flowers… surely that isn’t normal seasonal behaviour…? 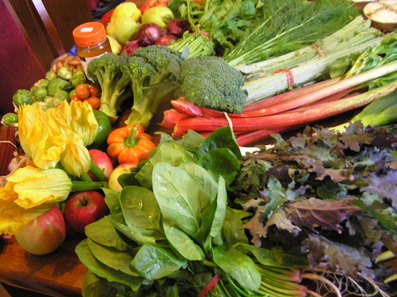 I’m just dazzled by the colours, to be honest…

There was a stall selling lots of different kinds of honey.  I asked where their bees live, and was told that actually they have portable hives which they take around to all the different farms to help with pollination.  In non pollinating seasons, the bees have a nice holiday in a local forest.  I found this rather charming, and picked up some orange blossom honey with a view to honey cake. 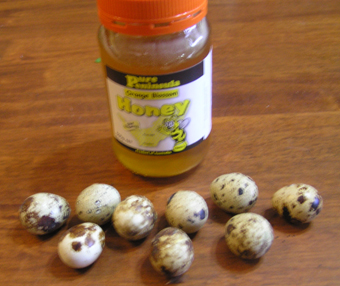 Honey, supervising the quail eggs (they are quite unruly)

At the fruit stall, they had quinces and Pink Lady apples that were actually really pink.  I think that’s the first time I’ve seen pink Pink Ladies.  It’s nice to know there is a reason for the name.

Fruits of tree and earth.

I got some of each, while giving unsolicited advice to a couple who were looking at the Italian lady’s stall from afar and wondering aloud about preparing artichokes:

“Ask the Italian lady who sells them.  She’ll tell you – she’ll probably even demonstrate it for you.  Oh, sorry, I should probably mind my own business.”

“No, that’s OK, that’s the whole point of coming to the farmers’ market…”

“Well, in that case, you should really try cardoons – they taste just like artichokes, and they are much easier to prepare.  Oh God, now I’m telling you what to buy.  I’m sorry.  Just ignore me.  But seriously, cardoons are great, they are my new favourite vegetable…”

Oops.  Fortunately the couple seemed to be amused and interested rather than appalled by this outbreak of bossy helpfulness. 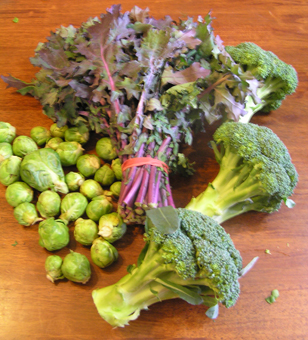 (Andrew waited until they were out of earshot before suggesting that we’d better get going to choir before I set up a stall offering advice on how to cook vegetables and which vegetables to buy in the first place.  He is so helpful…  Then again, he’s the one driving the car and ferrying me to choir, so I should probably not be too rude here…)

(Mind you, everyone should try cardoons.  They are definitely the easiest way to achieve an artichoke flavour.)

There were so many other stalls today – free range chickens, eggs, patés, cakes, more pies, jams, wagyu beef, oranges and lemons and limes, pistachios, dried mangoes, and goodness knows what else.  It was really one of the best markets I’ve been to, and definitely one where I sort of wished I had started off with a completely empty fridge.

I assure you, it’s the opposite of empty now… 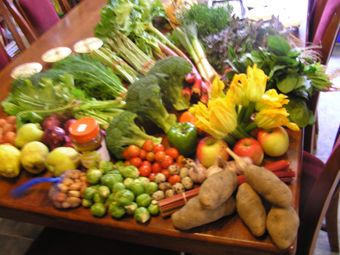