Today’s market visit was made a bit more exciting by realising just when we were about to leave that the car wouldn’t start.  I’m beginning to suspect that this is our personal annual harbinger of autumn – the flat car battery caused by lights left on after driving in very dim daylight… Fortunately, the RACV showed up very quickly, and we were able to get to the market after all (and in the meantime, I got my bulbs re-planted, which I’ve been meaning to do for weeks, so it was a win all round).

You really can tell that we’re into autumn now.  Two of my favourite veg people are gone now, and won’t be back until spring, and the stone-fruit man is gone, too.  The chap who sells raspberries and rhubarb has been gone for a while now, and the lady who sells berries has moved on from raspberries to blackberries and now to passionfruit. 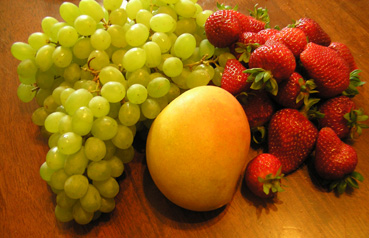 I like the way it looks as though the mango has this wild, two-coloured hairdo going on. Carmen Miranda, eat your heart out…

But it’s not all about the goodbyes – we have a new stall selling walnuts and chestnuts, one of the remaining veggie stalls has mushrooms, and the orange stall is now selling mangoes, avocadoes and grapes.  My potato man still has strawberries, and the Bedouin lady from the Preston Markets has moved to this market, which is great – I spent a fair bit of time recommending her to all the stallholders I am friendly with and telling them to buy sfoof! 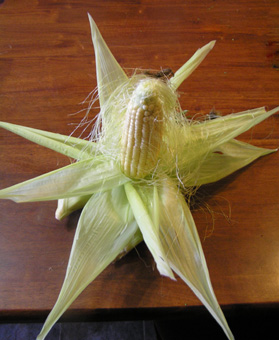 This is not sfoof. It’s corn. Having a bad hair day, but a rather spectacular costume day, so it could be worse…

Actually, I was particularly pleased to see her, because I am finding Lent very hard going this year, and she had, in addition to her sweets, all sorts of vegetarian mezze, including dips, felafel and pumpkin kibbeh, something I’ve heard of but never tried.  Guess what we’re having for lunches tomorrow?  Also, she was selling rosewater, which is great, because my local friendly middle eastern shop guy no longer stocks the brand I like (his supplier doesn’t import it any more), and I don’t care for the one he has instead – too much like perfume.  This is a diferent brand again, so I have hopes… 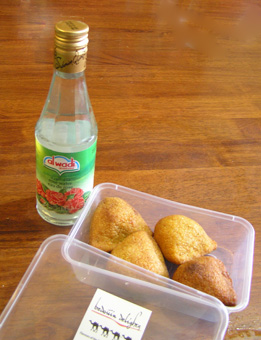 My next bee-line was for the lady who sells really good pizza bases and pasta.  I’m going to be out a lot this week, and I need a few head-starts on meals.

Spinach and garlic pizza, anyone? 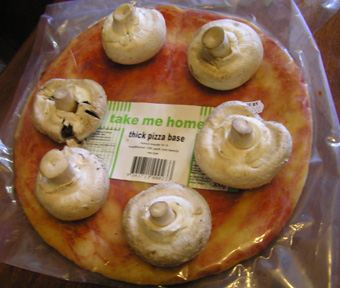 I’ve been asked to make another wedding cake – for Thursday week, in fact – so I wanted a good supply of free-range eggs.  And then I saw all these adorable little yellow and green zucchini, which just cry out to be used in a tart or frittata or somewhere their glorious brightness will be properly appreciated…

I seriously considered getting an extra dozen eggs, just so that I could dye them pretty colours for Easter, but alas, I learned the hard way a few years back that my interest in dyeing hard boiled eggs *significantly* outweighs my interest in eating them.  Especially because I’m actually quite efficient at dyeing them, so the fun decorating part really doesn’t take very long at all, unless I am decorating Far Too Many Eggs in the first place…  So the eggs will just have to associate with colourful veggies instead. 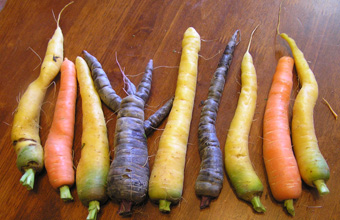 Carroty police line-up. Do you recognise any of these suspects?

Anyway, setting aside for a moment my inability to resist buying oddly coloured carrots, especially the kind who look as though they are Carrots of Cthulu and engaged in preaching hell-fire sermons to the root-vegetable heathen, even when I have carrots at home already… 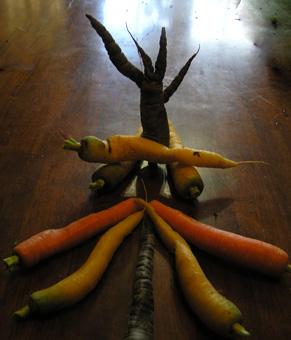 The carrot of Cthulu says “Repent! For the carrot soup is nigh! And the Tawny Scrawny Lion will eat you all up, instead of eating monkeys on Mondays and Kangaroos on Tuesdays and Zebras on Wednesdays, and ALL THE HORRORS OF THE LITTLE GOLDEN BOOKS WILL BE VISITED UPON YOU!”

… actually, I have no idea where that sentence was going.   And I’m now so completely distracted by the digressions in that caption that I don’t remember any of the things I wanted to write about at all.  Perhaps carrot cake?  One of these days,  I really must make carrot cake with purple carrots, just to see what colour it comes out.

No, actually, I think I was going to talk about corn.  Which is apparently Rockstar Corn, and carrot-surfing.

The Artist Formerly Known as Korn carrot-surfs during the broccoli solo. The broccoli is kind of irritated by this, because The Artist Formerly Known As Korn just loves upstaging hardworking brassicae, which is just typical, frankly. One of these days, the broccoli will leave the band and start her own indie group with kale, and maybe the leeks too, though you never know with Alliae, and then everyone will see just how pathetically needy that fluffy little pseudo-artiste of a Poaceae really is.

This seems to be getting rather out of hand, so I think we will just sidestep my observations about corn, apart from the fact that I’m somewhat enamoured of cornsilk, except for when it gets all over everything, and face the fact that the presence of corn at the market is clearly the last hurrah of summer, and the autumn and winter vegetables are upon us.

I did get some lovely kale, which I think really is going to get made into the kale and baked potato soup from Veganomicon, maybe with a few gratuitous leeks thrown in.

Kale, potatoes, garlic and leeks – a soup waiting to happen.

To my surprise, one of the veggie stalls also had really beautiful green beans – not the oversized kind I’ve been seeing recently, but really good ones.  And broccoli, leeks, and spinach, too – you really can feel winter approaching with all these dark green vegetables coming in again.

I’m just waiting for the quinces to arrive. 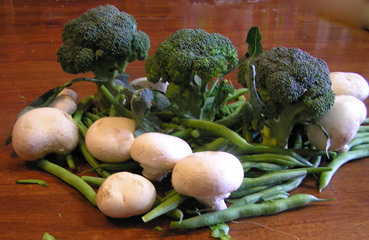 Far away, in the broccoli forest, everything is peaceful. Giant mushrooms grow in the shelter of the beans, and nothing stirs, except when the breeze blows from the east, bringing the sound of shrieking carrots and singing corn to the quiet forest. Nothing stirs. Not yet.  The things that lurk in the shadows of the mushrooms are content to bide their time, waiting, murmuring cruel little melodies to themselves, until the right moment comes.  In the darkness, one of the broccoli shudders, but nobody notices…