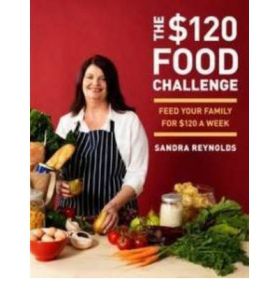 I can’t actually remember what I was doing online that led me to this cookbook, but when I read that it was by a Melbourne food blogger who had started off in 2010 trying to feed her family for $120 a fortnight (the amount left from her Centrelink payment after rent and bills were deducted) without resorting to frozen meals or margarine, I had to see what her recipes were like.  So I wandered over to Sandra Reynolds’ blog to have a look, and… actually, I can’t say it was one recipe in particular that stood out for me (though it must be said that I went stampeding straight over to the sweets and baked good sections and really liked what I saw), I just liked the whole look and feel of the recipes, and could see at a glance that there were plenty of things that I could use.

Besides, I’ve been talking to a few people recently who look likely to be on a similar budget over the next months, and I wanted to have a look at the cookbook so that I could recommend it.  Also, of course, budget cookbooks tend to have handy recipes for the cheaper cuts of meat that I’m less familiar with. But I confess, it was really more a case of me going “Ooh!  Cookbook! Ooh! Slices!  I haven’t cooked slices in ages!” and then exhibiting no self control.

Which is slightly ironic given the theme of this book, but I’ll let that slide.

Anyway, the cookbook arrived today, a week or two ahead of the official publication date, which made me feel like the sort of professional reviewer who gets ARCs, so I couldn’t resist reviewing it.  Though, having read it, I would certainly have reviewed it anyway (just not so promptly).

Two points to start with.  First, Reynolds herself notes that food prices have risen significantly in the last two years (I do hope that Centrelink payments have risen in a corresponding fashion, but I somehow doubt it), and she feels that it is no longer realistic to feed a family of four on $120 a fortnight.  The budget is now $120 per week, which is still a pretty impressive feat – about $4.28 per person per day.  Hardly extravagant.
Second, full disclosure: I like this cookbook and its recipes very much, and I’m very glad to know how to reduce my food budget if I need to, but it is not currently the book for me.  Reynolds keeps her costs low by shopping fortnightly, including plenty of vegetarian meals, cheap cuts of meat and seasonal produce, as well as home-brand and bulk goods.  These are all great ideas if one is on a tight budget, but I must admit that as long as I can afford to do so, I’ll stick to my farmers’ markets and my beautiful free-range meat, and above all the luxury of being able to support local farmers by buying fresh and organic foods from the people who grow them – being mindful that this is a luxury, and it is reflected in the cost.   So while I may well adopt the shape of her weekly menus  (because they are very good) and many of her recipes, I’m unlikely to end up within her budget because I’ll never be able to resist the fascinating things I find at the farmers’ markets.  Which is fine, and does not in any way negate the fact that this is a really useful book.
Reynolds starts by explaining how to create a household budget and how to plan a menu.  She gives a few cheap breakfast suggestions and some sandwich filling ideas.  The general shape of her weekly menu is cereal and/or toast, fruit or juice for breakfast, sandwiches or leftovers for lunch, and evening meals that alternate two or three vegetarian meals per week with a fish meal, a beef meal, a pork or lamb meal and a chicken meal.  She plans for two desserts per week, plus two batches of sweet snacks for lunchboxes or afternoon teas.  I can live with that.
The book is organised into seasons, on the grounds that shopping seasonally is cheaper, each containing about twenty recipes… So spring has pasta with broadbean pesto, pan-fried barramundi with salsa verde and potato galette and vietnamese chicken meatballs in lemongrass broth; summer has a zucchini, capsicum and feta frittata, thai beef salad and salted cod fishcakes; autumn has fettucine with mushroom ragout, balsamic chicken with pomegranate, and osso bucco; winter has a coiled sausage and apple bake, pumpkin and pea korma and vegetable tagine with tomato couscous.  And that’s me flipping randomly to recipes and trying not to come up with too many vegetarian ones, incidentally – there are very few things in there that I don’t want to try, and these are mostly either pork (no thank you) or fish (difficult to convince Andrew about).  While Reynolds has delved into Thai cooking far more than I have, these recipes look like the work of someone who cooks in a similar way to me.
Also I must say, one of the many charms of this book is that it is Australian.  This means  Australian budgets (so the things Reynolds thinks are cheap really *are* cheap in my supermarket), Australian seasons, and ingredients that you can find in Australian supermarkets.  It also means an author who understands that in summer you really, really don’t want to have the stove or oven on for any amount of time if you can help it!  This last part is particularly important.  Reynolds also has more filling meals for winter, which seems like an obvious choice, but it’s surprising how many seasonal cookbooks don’t manage it.  Though, speaking of winter and spending time in front of the stove, there are a fair number of recipes in here that require forward planning or long preparation times – I’ve found myself that two ways of getting flavour into food are expensive ingredients or longer preparation or cooking times, and clearly Reynolds has had to choose the latter option here.  None of them seem as though they would be impossible to fit around a working week, but you would want to know in advance what you are cooking so that you can start the slow-cooked things or the things that need to rise or set at appropriate times.

And did I mention the baking?  Apricot slice, easy chocolate and caramel slice, banana and chocolate cupcakes (oh, come now – who can afford bananas in this day and age – saffron is very nearly cheaper!), lemon and passionfruit slice, and a chocolate and nutella cake that derived from a cake using chestnut purée (and I must admit that while I am not keen on nutella I *do* happen to have a tin of chestnut purée in my pantry, so I may be reverting it right back).  I sense a lot of baking in my future.

(Yes, yes, you can all stop laughing now.  I don’t actually bake *every* day you know…)

There is a good selection of vegetarian recipes in this book (and Reynolds does love her legumes, especially lentils – my recipe roulette just didn’t land on those pages).  I just did a quick census of Autumn and found ten vegetarian recipes, two with pork, two with chicken, three with fish, two with beef or veal and one with lamb.  It’s less useful for vegans – I found four recipes in the Summer section that were vegan or could readily be made so (for example, omitting grated parmesan from a spaghetti recipe).

A census of Winter (yes, I’m going through the seasons randomly) found more than half of the recipes were dairy-free and several of the remainder could be converted easily enough (they just contained grated cheese to serve, or butter to sauté).  I’m less certain about fructose, but the savoury recipes looked pretty good to me in this respect – the desserts and sweets leaned fairly heavily on fruit. Frankly, that’s a selling point to me, but I understand not everyone leans that way (or indeed can lean that way).

Overall, I’d say this was a useful book with a very good range of recipes.  There are plenty of things in here that I plan to try, and I found a lot of the vegetarian recipes, in particular, appealing.  I like Reynolds’ habit of alternating different kinds of meat and fish with vegetarian dishes (and I’m rather hoping that I might actually be able to use this as a guide to affordable fish, in fact – European and American books are pretty unhelpful to the Australian cook in this respect).  My one caveat would be that I did think a number of the meat recipes were a bit low on veggies and could have used a side salad – but then, I like a *lot* of veggies in my food, so I may be biased.  Still,  if it were me, I’d add a dollar on to each meat-eating day as a salad or vegetable budget.

That said, I think this book is well worth buying if you are looking for tips on how to spend less on your food while still eating well.  It is also, I think, well worth buying if you just want a nice collection of family dinner or lunchbox ideas, because it doesn’t feel budgety in the sense of being all mince and curry and soups (not much mince in there at all, actually).  It reads, in fact, like a slightly old-fashioned family cookbook, with updated flavours.  I can see myself getting a lot of use from this, and I’m pretty sure I’ll be visiting Reynolds’ website again, too.

You can buy The $120 Food Challenge at The Book Depository , or buy it locally at a lot of Australian bookshops from the beginning of February.  I’ve spotted it on the Readings catalogue and at Books for Cooks. At $29.95, it’s definitely worth the money you will spend on it.

9 comments for “Book Review: The $120 Food Challenge, by Sandra Reynolds”